On the Subject of Husbands...

Posted by Ethne~
It was just a funny day today.  I got a little crabby for no particular reason, but that was cured 1) by talking to Shaun and 2) by talking to Lori.  Shaun talked me down from being a bit freaked about how I’ll get everything done for the girls’ birthday party this weekend.  What a nice hubby!  By the time I talked to Thrifty Nana, Dad and Whit later, I was pretty good.
When I talked to Lori, it was just plain funny.  She read (probably on HLN online) that Prince Harry is in the States for a couple of weeks for helicopter training.  Woo Hoo!  This prompted my question: "Would you leave Steve for a real-life prince?"
As you all know from here (and here and here and here and here), Lori and I are B.I.G. fans of all the royal wedding hoopla when Prince William and Princess Kate got married this past April.  Big time.  What would we do if it were our turn?
My response was that it would be great if we could get Steve and Shaun to parent our children full-time, then live in a polygamist country where we could be married to both our real husbands and our prince husbands.  We’re kidding here folks, but this is our exact conversation!


Lori took a more practical approach.  She said first that she didn’t know if her morals would allow her to leave Steve for anyone else.  She’s that good, I know.  Here I was trying to have it both ways.  But with a lot of prompting from me, she conceded that if he was a REAL LIFE prince (not just some Prince Charming wannabe), and he gave her a huge ring, she’d consider it. 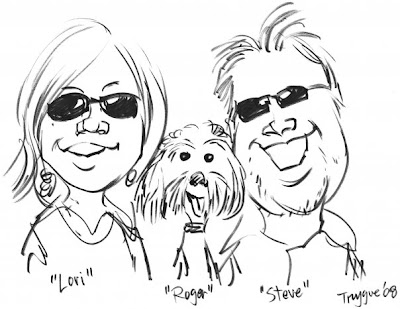 By this time, I was totally un-crabby from laughing.
My ‘husband chuckles’ did not end here though folks.  I talked to my dad tonite and he and I laughed our a$$es off over what will be transpiring with my sister and her husband Bryan tomorrow.  See, they are coming to town from Atlanta for Whit’s Master’s Degree graduation on Sunday.  They have two cats: Randy and Largie (a/k/a Harry) and a dog: Blue.  Blue is going to the doggie resort where Whit signed him up for the pool-time, play-time-with-other-dogs and a-walk-in-the-woods package.  Randy and Harry would be more expensive to board at a kitty chalet than to pay to take on the plane.  So what are they doing?  That’s right, both Whit and Bryan will each be taking a cat as their carry-on luggage for the plane trip to big city, MN, tomorrow.  Dad and I could die laughing.
[Whitney and I discussed the amount of drugs she would use to semi knock the cats out for the flight – vet-sanctioned, don’t worry.  She thought perhaps she would only give each cat a half-dose so they wouldn’t be completely comatose-like.  I reminded her that a whole dose might be a good idea considering it will be her 6’4” husband who will be boarding a cramped airplane with one of those cats.  SHE WASN’T CONVINCED, can you believe it?!?]
Bryan knows this, and is prepared (inasmuch as any schmuck – no offense Bryan – can be prepared to bring two cats through an international airport and on a 3-hour flight).  But what Whit has not, evidently, gotten around to telling him yet is that they have to leave at 5:30 a.m. to get through traffic and to the airport in time to make their flight.  Ha!
Bottom line, Friends: who needs to marry a prince when we’ve managed to con these gems into marrying us.  Let’s face it – only a special guy would be able to handle me.  And only Steve would make homemade ranch dressing or midnight Taco Bell runs for Lori.  And for heaven’s sake, no more saintly man than Bryan would be willing to haul 2 full-grown cats through the bustling Atlanta airport for my sister.
Amen!  Haleluia!  Till Monday, this is Ethne signing off.
Posted by WOM-MOMS at 9:39 PM

Email ThisBlogThis!Share to TwitterShare to FacebookShare to Pinterest
Labels: husbands, tuesdays at noon