Posted by Ethne~
The Pride: Whit graduated!
Whit graduated yesterday with her Master's Degree in Counseling and Psychological Services.  Mom, Dad, Bryan, Bryan's mom, Judi, and I went to the ceremony and we were just about bursting with pride (Shaun stayed back and watched the girls and the Vikings game, so they were proud in absentia).  It was awesome.  And to top it off, Whit was in a friendly-type mood and even cooperated with taking ridiculous pictures in her gown and the red-and-white Master's Hood she was donned with.  See below: 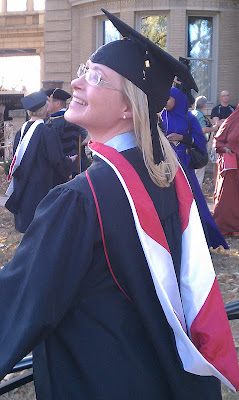 As a special treat for you and a follow up to last Friday's 'husband' post, I thought I'd give a cat-flying update.

The Prejudice: airline fliers do not like people who bring cats on vacation...
Whit and Bryan did get up at the a$$-crack of dawn (I think that's the funniest term ever, so pardon my language) on Friday for their flight, and they sedated their cats, Randy and Largie, shortly before they left.  They made it to the airport in plenty of time and Bryan even reported that the day was looking up better than expected when the clerk at check-in offered to upgrade them to first class.  How 'bout that?
Then, it started to slide back down a very slippery slope.
Whit reports that it was probably the longest line at security that she's ever seen.  And it's evidently the rule that if you take your cat through security as 'carry-on luggage', you have to take it out of its carrier, put that through security, then walk through the scanner holding your cat.  Ha!
I believe Whit took Largie through in the tried-and-true carrier, then Bryan followed with Randy in the brand-new carrier.  But...Bryan couldn't get the easy-access zipper only, so as they held up traffic, Whit and Bryan had to jointly yank the zipper open and pull Randy out a small opening.  But he didn't want to, or was too sedated to, come out, so Whit had to reach in and grab Randy by the leg and yank him out.  Bryan reports that he was DYING and Whit said his face was BEET RED.
So they get onto the plane in their nice first-class section, but their seats are in the front row, meaning no place to stow the cat under their seats.  And you have to stow your cat under your seat.  So the flight attendant and Whit and Bryan asked around until, after multiple instances of musical chairs and disruptions in seating to at least four other first-class passengers, they got the cats stowed properly under the seats.
Bryan reports that he really wanted to get a cocktail, gratis in first class, but felt it would be inappropriate for 8:00 a.m.
When they got to Thrifty Nana's house, Whit pulled the zipper on Randy's carrier and it opened just like that.
Posted by WOM-MOMS at 3:29 PM

Email ThisBlogThis!Share to TwitterShare to FacebookShare to Pinterest
Labels: travel, tuesdays at noon