As you know, Mur-Man got a new “big boy” bed and this required a little bit of room re-arranging.  In addition, we did a little bit more decorating, painting, etc.


I wanted to give you a few room tweaking photos!
In addition, there will be more photos to come.  I promise, I will get out the fish-eye lens very soon for photos of the entire room!  It's so colorful!  Probably one of my favorite rooms in the house!
Posted by WOM-MOMS at 5:03 PM 2 comments:

Holy crap, Friends – the best friends and I have happened onto a gold mine.  A fantasy football league, except take out football and insert celebrities.  And except a half-year long season, once per year, it’s resolving 2-month seasons.  Have I died and gone to perpetual best friend heaven?

You see, discussions with my bffs, Steph, Grizz, Lori, Slags and Kari involve the usual – kids, husbands, pets (one-in-the-same-thing if you ask me), smutty books and INEVITABLY the latest celebrity news.  HELLO, Steph should write for tmz.  You should hear Steph and me when we get going about ‘Tan Mom’.  We are wiping away the tears of laughter, Friends.

Steph gets all the important news on her iPad because she also subscribes to the key mags in paper.  At Kari’s & my office we have a subscription to People mag and it is one co-worker’s and my weekly challenge to guess what’s on the cover.  I have a decent guess-rate, though that’s gonna spike now.

That’s right.  Celebrity Fantasy Draft is going to shoot my expertise into the stratosphere, my Friends.  It’s genius!  You can check the website for the rules – you accrue points by the celebrities you’ve drafted and ‘own’ as they are published in the pages of celeb magazines each week.  Whomever has the most points at the end of the 2-month season wins.  Smack talk is encouraged. (If your celeb effs up or gets on the worst dressed list, you lose points.)

Let me tell you, we are drooling with our excitement.  Like we’re Lassie and we have hydrophobia.  It’s like a Christmas present, minus the rabies.  The first season, for us rookies, is free.  Each season after that is $20 (for the whole team, which is gonna be less than $5 apiece for our group), up to 20 people per league. 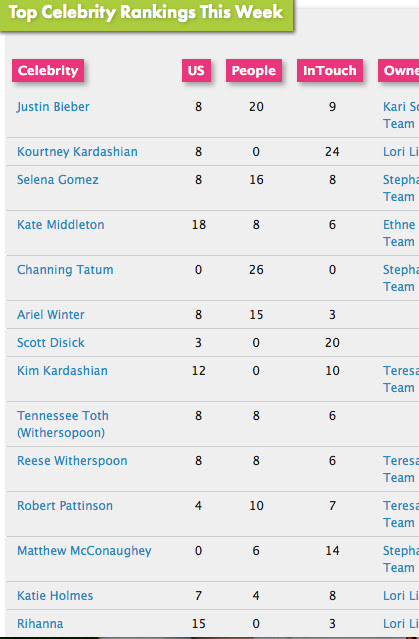 Our season starts officially in December, which is why we did our draft yesterday.  It was rough, especially with us separated, and hard to pick, but we did all get several of our draft choices.  Slags hauled with the Kardashians; I hauled with the royals and the Obamas.  We’ll keep you posted!!!  If you do this, please comment so we can ‘hook up’ our leagues and keep track of how each other’s scores and celebs are doing. 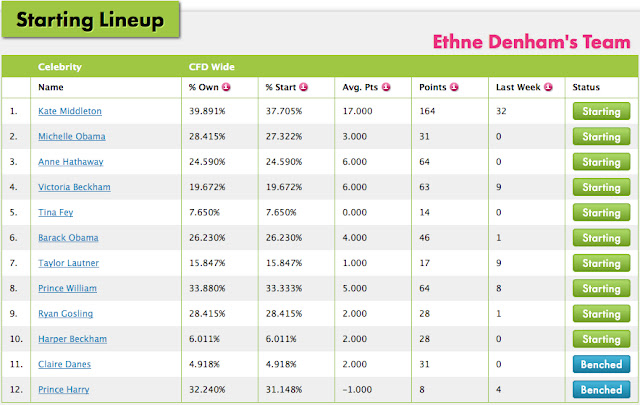 Well, here’s Shaun’s quote on the lefse: ‘epic fail’.  You heard it here first, Friends.  It’s not pretty.  I could be that I’m Swedish and Kari’s Polish.  It also could be that you probably needed to learn how to make it on your momma’s hip in order to do it well.  Regardless, it tastes awesome and we’ll blog about it soon.

Lefse is purely a time-filler though.  We’re counting down the last ever seconds until Twilight Breaking Dawn, Part 2, opens up.  That’s right bit&he$, we got tickets for midnight opener.  Decision Done.  The reviews said this is the best Twilight movie by far.  Hell to the Yes.

Now Shaun is telling Kari stories how every “bad” (according to him – “bad-a$$” according to me) thing that has happened to him in North Dakota (which I can’t deny has been every trip) has been with Lori and Steve.  That’s because he doesn’t have ND Tiger Blood.

Oh, this is what best friend evenings are made of.

And here’s a special little giveaway:  If we get 3 new followers by 3pm tomorrow, I will post a picture of what I look like when I wake up tomorrow morning.

MUR-MAN ALMOST SNEEZED ALL OVER YOUNGHOUSELOVE!