Speedy Shower Scam [on my kids].

Posted by Ethne~
So we've had some issues with the girls taking really long showers (we gave up on baths), pouring shampoo down the drain in the name of research, and so on.  I wouldn't mind it exactly, since everyone enjoys a nice warm shower every once in a while, but they take evening showers, right before bedtime, so we need time to dry hair and chill after showers.
Last night, on the way home from swimming lessons (which are late), I had a brainstorm.  What if we told them their showers had to be timed because they only had 5 minutes of warm water?  Otherwise we'd have to turn the water to cold for their rinse.  Genius.
I did, and KD asked why we couldn't just turn up the hot water.  [Good question, kid.]  I quickly added that our next-door-neighbor, Pete, is in charge of the hot water switch for the whole neighborhood, so he has to look out for our whole neighborhood getting hot showers.  Shaun added that he talked to Pete, who said that we all had to limit our showers to 3 minutes.
Yikes.
As a part of our parenting technique 123Magic, one of the things we do to get behaviors we want done ("start behaviors" as opposed to "stop behaviors", like whining), sometimes we time them [eating, cleaning] with a kitchen timer.  So we got out the timer and set it to 3 minutes.
They were very speedy showers indeed.

I should remind to tell Shaun to clue Pete into this scam, though, as I wouldn't put it past the girls to straight up ask him about the water valve.
Posted by WOM-MOMS at 7:44 AM 25 comments:

Email ThisBlogThis!Share to TwitterShare to FacebookShare to Pinterest
Labels: kids

FRIDAYS IN FRANCE: FORGET WHAT YOU HAVE HEARD ABOUT FRANCE…

Steve, Murray, and I have now been in Nice, France for three weeks!  And it has been AMAZING!

I am going to say it, I was nervous.  I had heard the stories of how French don’t like Americans because of our limited French speaking abilities.  I came here knowing maybe three words.

But I found immediately, that if you put in a little effort (attempt to speak it), they like it.  Give them a smile and they will serve you well. 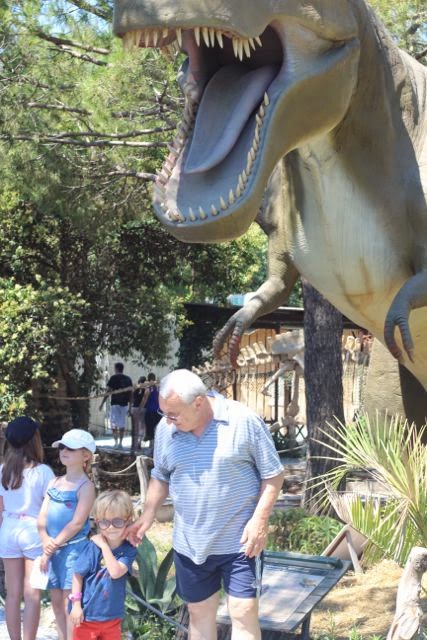 Let’s put ourselves in their shoes for once.  Could you imagine if a Chinese speaking transplant started talking to you in Chinese in the US.  We would look at them, like they are CRAZY (unless you know Chinese)!  Well, the same thing goes both ways.  We are not superior and our language should not be either.

So here’s a mini French lesson for you.  I spell it, like I say it (this is NOT PROPER FRENCH), but this lesson will get you by if you plan to visit.

I actually have a friend that will be visiting the area very soon and I gave her this very listing.  I keep it in my cell phone notes and use it as a reference when needed.

Remember, a smile and effort goes a long way.  Don’t be afraid of travel and culture…trust me, it has been 100% worth it.  I AM LOVING IT!
Posted by WOM-MOMS at 4:52 PM 5 comments:

Email ThisBlogThis!Share to TwitterShare to FacebookShare to Pinterest
Labels: travel

Hey guys, sorry I'm behind on posting.  I was sick all last week, so did none of the things I had planned to blog about.  According to my doctor, I had one of those viruses that mutated its symptoms, meaning I had a new one each day for over a week.  It was amazing.

Our family is growing...

Posted by Ethne~
...by four paws!
It is with trepidation (on my part, being a cat person my whole life) and excitement all around (for both Shaun and me - the girls don't know yet) that Shaun and I have decided to get a dog.
The breed is a Papillon with a little long-haired Chihuahua mixed in.  The owner who bred the parent dogs owns them both and assures me of the parent temperaments and lack of yippy-ness.  Whit (my sister) concurs, since the owner is her next-door-neighbor.
Dad (Louie) is 100% Papillon and looks like it.  That's what I envision our dog to look like.  Mom (Lola) is 1/2 Papillon and 1/2 long-haired Chihuahua.  She looks just like a Yorkie.  I mean, JUST LIKE.  So I can't say what the puppies will look like for sure, except that I envision them to look more Papillon than mom, since they have more Papillon in them.
Theodore has also not been told, though I have started moving his food to a newer, higher location, and he thinks I'm nuts.  Being a large cat, he will tower over this dog.
When we pick up puppy in mid-August, I'll tell you more!
Posted by WOM-MOMS at 7:33 AM 5 comments:

Email ThisBlogThis!Share to TwitterShare to FacebookShare to Pinterest
Labels: family

AMERICANS ARE “MOSTLY” FAT AND I KNOW WHY!

OK, I think it is safe to say that Steve and I could fall somewhat into the above title’s category.  We don’t help the American fat stereotype at all, but we are working on it!

Since we have been in France we have discovered a majorly walk-able city.  Like, Steve and I are logging over 15,000 steps most days (and some days we are hitting more like 24,000 steps). 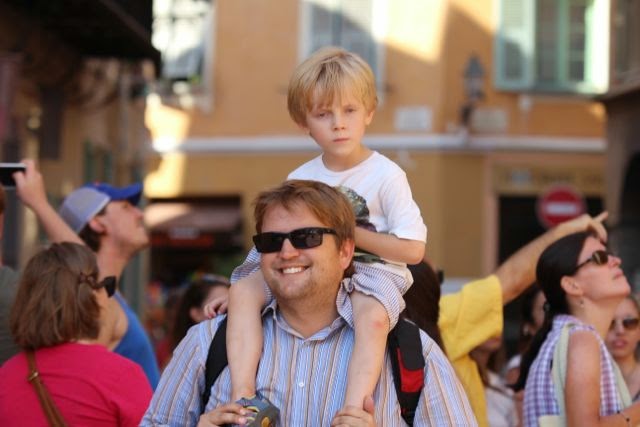 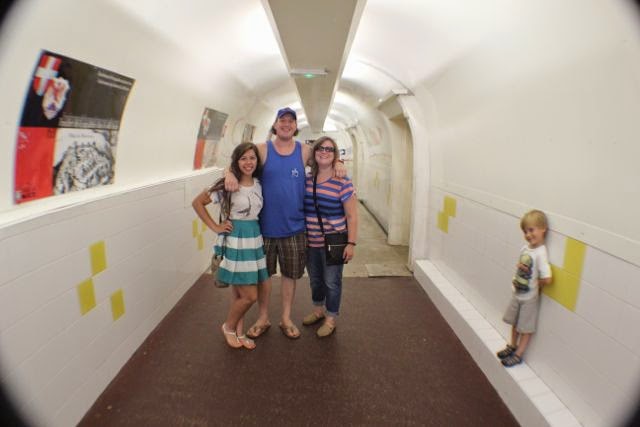 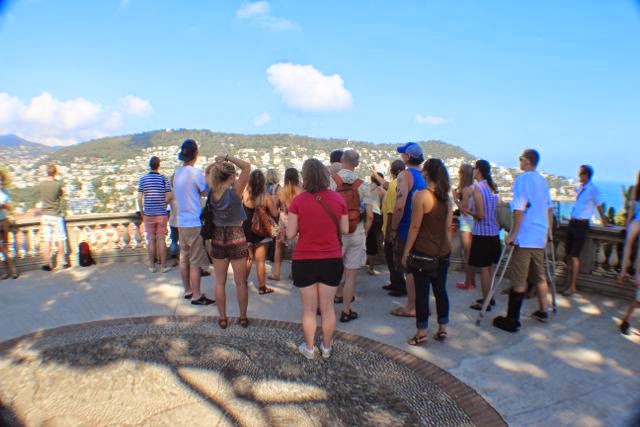 You can walk everywhere in Nice (and Paris) along with the required public transportation here and there.  There is a café, bar (restaurant with beverages), grocery store, fruit stand, and gelato shop on every corner.  Everything is in walking distance. 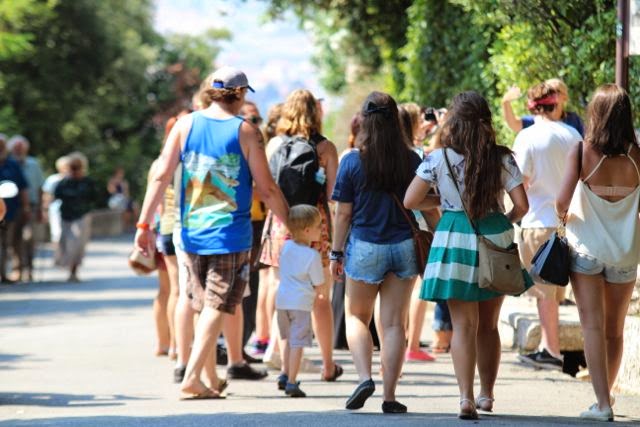 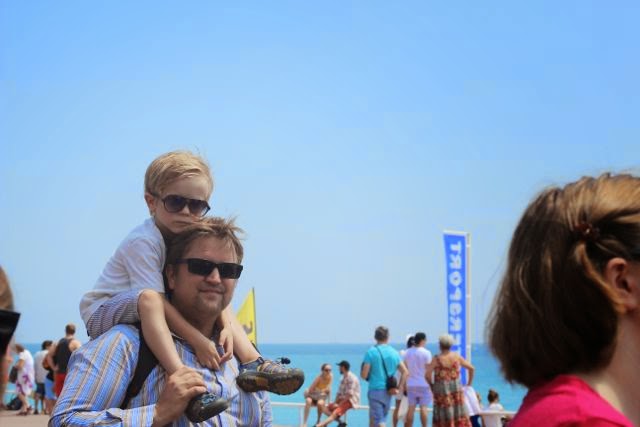 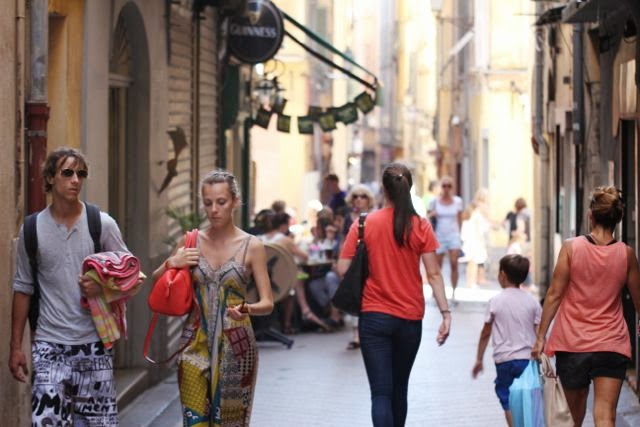 Our one travel mistake we immediately discovered was not packing a stroller for Mur-Man (or push-ette in French (sp?!?)).  I am sorry, but a 4-year-old can’t handle 24,000 steps/day, so thankfully we tracked down a stroller and have been using it since our first week in France. 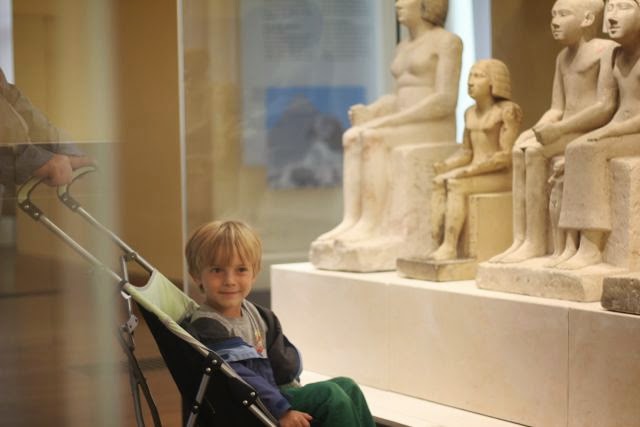 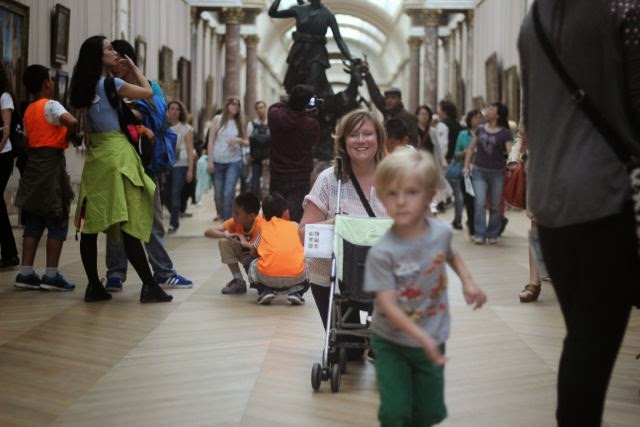 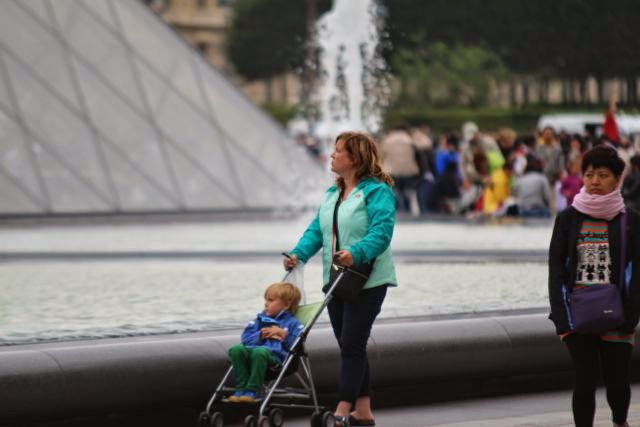 In addition, my one splurge (my purchase) will be one of these grocery/shopping carts on wheels.  All the French women have them.  I am sure I could find them in most major US cities, but in big city, ND, you just don’t see them.  I live two blocks from the grocery store (and I drive)!  It’s a crime!  I am going to get on my walking shoes, strap on my fit bit, and load up my new French investment. 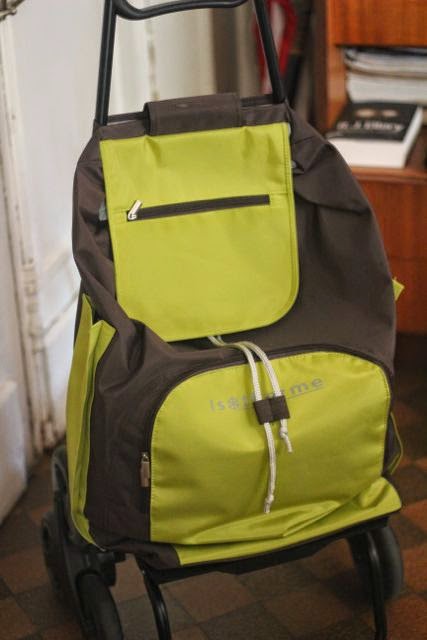 Posted by Ethne~
So remember when I told you I was related to actress Tippi Hedren?  And remember when Lori dressed like her for Halloween?
Well, we met her in May!  She came home to Minnesota to speak at her hometown (New Ulm, MN) library and so we went down to have a mini family reunion with her the evening after.

Let me tell you that we should all be so lucky to look like her when we're octogenarians.  Her older sister, Patty, was with her, and they were both whippersnappers!
Tippi is passionate about her big cat preserve, Shambala, where she rescues large cats which are mostly bred privately and then cannot be contained as adults in the individual's or breeder's home (despite what they may think when they're little).  She was adamant that there needs to be stricter legislation to regulate the breeding of wild animals.  Tell your legislators!  She also said that anytime a person has the chance, they should adopt a whole litter of kittens.  "Best thing I ever did," she said.  Shaun loved this notion.  As to her sister, Patty, she wasn't in the movies, but she was just as lovely.  She and Shaun got on like two peas in a pod.
Posted by WOM-MOMS at 7:49 AM 5 comments:

Email ThisBlogThis!Share to TwitterShare to FacebookShare to Pinterest
Labels: family

Posted by Ethne~
I know you won't even believe it, guys, but I'm back!

Lori, Steve and Mur-Man are off in France and from the first pictures I've seen, it's been AMAZING so far.  She'll check in with us, probably on Fridays.  From France.  Ah...alliteration.
The girls, Shaun and I are doing pretty well.  You remember, maybe, from this post, that I had to take a little time-out from the blog so I could focus on the kiddos.  They didn't have an illness or anything, but we were having some struggles adjusting to life in school and I needed to get that figured out.  Academically, they're doing awesome.  I'd say on a scale of success, they're healthy as horses and I've lost considerable hair.  Fingers crossed that the adjustment to first grade is on pace with how far we've come.

Shaun and I still have the girls following a gluten-free diet, but not for health reasons.  At this point, I'd say that using the removal of gluten to help kids (mine anyway) with focus or attention is a total bust.  But I found that removing gluten is a way to be very strict about the things we're putting in our (their) bodies.  So, keeping in mind that the GF trend doesn't mean just buying anything at the store marked GF, I've kept us on this meal plan as a way to eat as much clean food as possible.  It's kind of paleo (not all) and kind of organic (not all) and kind of closer-to-the-source/minimal-processing/natural ingredients as I can make it.  I have also recently removed artificial dyes from their diet.  That one did have a study attached to it that made lots of sense to me, in the latest Parent magazine or so.
Theodore, our cat, is still rocking around the joint.  I've had him for 12 years, and he was an adult when my sister found him.  I tell Shaun he will probably live till age 42, the oldest known cat, according to My Cat From Hell on Animal Planet.  Shaun loves this suggestion.
My sister got married and is expecting a baby, too!  We find out the gender of the baby soon and I cannot WAIT.  Lori and I are feeling PINK.
So that's the short of it.  I'll fill you in some more in future posts!  Thanks a million to Lori for keeping this blog going while I tended to my flock.
Posted by WOM-MOMS at 6:30 PM 9 comments: