A TALE OF TWO STOOLS 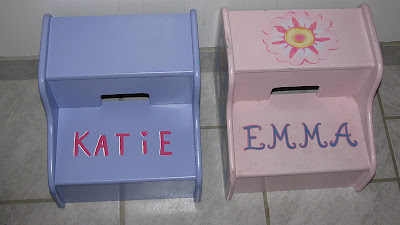 Like most expecting parents, Shaun and I anxiously awaited our 20 week ultrasound.  I was DYING to find out the gender of the twins.
We knew we would be having twins from the very start.  I found out I was pregnant and my doctor had me in for an ultrasound at 6 weeks along since I had lost a pregnancy a few months before.  We saw my doc immediately after the u/s and you couldn’t scrape the smirk off his face.  Here I’m thinking with relief that it looks like it’s a viable pregnancy.  Then he says: ‘it might be twins, come back for another u/s in 2 weeks’.  I nearly became a widow right then and there.

See, multiples run in my family: my great-grandmother (paternal side) was a triplet ~ Lydia (my great-grandma), Lillian and Leona.  BUT, only Lydia had children and none of them had multiples.  So it was kind of a joke when I was growing up: ‘har har, Ethne, you could have triplets.’  HA!

The 8-week u/s confirmed I had twins in there, and things proceeded smoothly until 14 weeks when I had a placental abruption (serious), calling for another u/s in the ER.  I told Shaun to watch and see if there were any wieners visible while they were checking to find out what was wrong.  Fortunately, the abruption healed itself.  Unfortunately, the weiner check wasn’t possible – we’d have to wait till the 20 week ultrasound like everyone else.
By the time the 20 weeker came ‘round, my doc knew I was just frothing at the prospect of finding out the babies’ gender.  Like a wild dog.  The day of the u/s, I drank a tanker full of orange pop so the babies would be hopped up on sugar and move around a lot at the u/s.  Success!  The tech pointed out that there were 2 little girls in there.  Yay!  That was a Friday.
Monday my doc calls me and said he had the radiologist’s report and did we get to find out the gender of the twins?  Yes, I said, 2 girls.  Ummm, he said, the report says Baby A is female and Baby B is male.  If you say so.  We were happy either way, of course.  Next u/s, 28 weeks along.
So I had both of my baby showers – and we got lots of cute girl and boy stuff.  We picked Easy Mac’s name for Baby Girl A and Jack for Baby Boy B’s name.  And my awesome sister-in-law, HS, found two perfect stepstools with the kids’ names on them.  Easy Mac’s was pink (RIGHT ON) with flowers and swirls and dots; Jack’s was white with sports.
Then we had the 28 week ultrasound.  I told the u/s tech to verify gender for us since we had been told two different things, JUST FOR GOOD MEASURE.  Well, she said, there is NO DOUBT there are two girls in there and she’d be sure to put in the report that the radiologist should e-nun-ci-ate ‘male’ and ‘fe-male’ when he dictates his analysis of the u/s film.
Evidently the transcriptionist heard the radiologist say ‘male’ when he really meant ‘female’ for that tricky Baby B.  WHAT?!?!?!?

So we had to pick another girl’s name (harder to pick another name it turned out) and figure out what we were going to do with all that blue stuff.  We kept most of it, but obviously couldn’t stick KD with a ‘Jack’ stool permanently.
That’s as much lipservice as we gave it for the next 3-½ years.  We kinda got busy with two demanding newborns/toddlers/pre-schoolers.  When the girls were around 2 we bought purple spray paint for the stool.  Then this past summer Shaun gave the stool a couple coats of primer (buh-bye sports) and a couple coats of purple.  All that remained was the quick and simple task of painting her name and a design onto it.

Well, today I purchased a primary color package of acrylic paints for $4.97 at Wal-Mart, plus a $.97 bottle of pink for good measure.  No more talking, let’s get some action up in here!  And for FREE, Thrifty Nana has clear-coat spray paint to cover and seal the design we put on it.  (Tons of paint leftover for the future…)
Tonight Thrifty Nana took Easy Mac for a sleepover just by herself.  KD was a teensy bit upset till I told her we would get to do a special paint project of mixing colors like we do on the Curious George website (pbskids.org) and paint her stool.
KD got one side all to herself and I gave her some paint to have at it.  As she masterfully applied the colors, she would shout out “Genius!”  That right there was worth the mess.  And mess it was.  She ended up with pink paint in her hair, yellow on her fingers and blue on her lips. 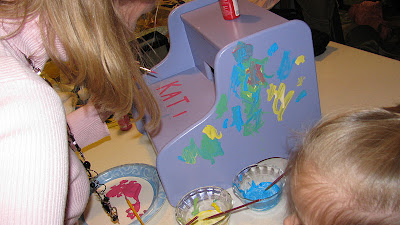 I did a nice job with her name I think.  I’m no artiste, which is different entirely from being creative.  That I can do.  In prep today, I did a little internet search and happened upon the idea of making critters, flowers, etc. out of thumbprints.

I painted the grass and fingerprint flowers.  Then KD said she wanted a bird, so a thumbprint bluebird it was.  And she wanted a ladybug, so fingerprint red splotch was applied.  Shaun helped me think up a good way to do wings on my bird and how many legs the ladybug needed. 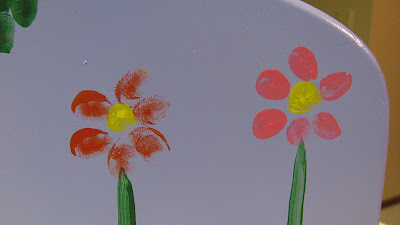 But KD thought she needed a tree too.  So we mixed together all the colors on my paint plate till we got a brownish tone.  That was the trunk, then a heap of green fingerprints for the leaves.  KD didn’t get in on this because she was now fresh from her bath; plus it was my side.  We swirled a knot on the trunk and thought there needed to be a fairy door and awning at the base of the tree too. 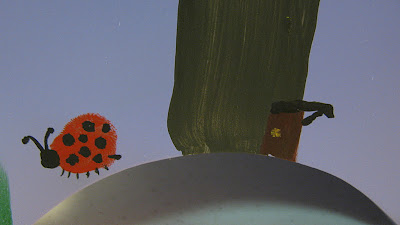 So, the moral of my story is not that you should wait till baby comes to find out the gender.  HECK NO!  I couldn’t stand to wait.  I told Lori when she and Steve found out they were expecting that I DEMANDED that they find out the sex.  Decision Done.  Not an Option.  I’m not sad we had the u/s snafu, and I’m still really glad we knew ahead of time what we were getting.  I did not want my whole baby’s nursery and ensemble to be green and yellow.
And, 4 years later, re-painting Jack’s to KD’s stool provided for a fun activity we could do together.  Special one-on-one time just for KD: no need to share Mommy and Daddy tonite. 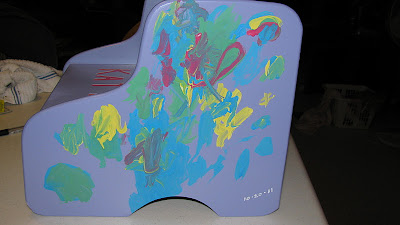