A few weeks ago my mother-in-law, sister-in-law and I dug through her old family recipes to find one that hadn’t been made in probably 2 decades: Grandma D’s (Shaun’s grandma) summer sausage.  I was stoked.

We have summer sausage, cheese and crackers at lots of family get-togethers, plain and simple because we LOVE it.  The grocery store varieties are perfectly tasty, and I had never even heard of regular folk making it.  Till now.

Mom D said that when Grandma D used it make it, it was awesome.  She had the recipe and had eaten it, but had never actually seen it being made.
Well, we weren’t going to let that stop us.  And it appeared pretty simple – but was it??
Here’s what the recipe called for:
5 pounds ground beef, the fattier the better: I found 75/25 at the grocery store for $3.99 per pound
5 rounded tsp. tender quick salt
2-1/2 tsp. mustard seeds
2-1/2 tsp., coarse ground black pepper
2-1/2 tsp. garlic salt (we used 1 tsp.)
1 tsp. hickory smoked salt or 1 tsp. liquid smoke

Mom D got all the ingredients and I picked up the ground beef.  This was a full-on family adventure.  Insert picture of Shaun looking skeptical.  Dad D wasn’t skeptical because it was his parents who made it and he knew it was awesome.
So this is what it says to do:
1)   Mix with your hands all of the ingredients till it’s all well combined.  Not too hard.  Cover with plastic wrap and put in the fridge until tomorrow.


2)   Take out of the fridge the next day and stir around well.  Re-cover with plastic wrap and put again in the fridge.  Do this for four consecutive days.
3)   Form the meat into logs, packing it as tightly as possible.  Grandma D’s instructions says packing it into a Pringles can (that has the bottom cut out) worked well – pack it in there tightly and then shove out the bottom end.  The meat is now tightly packed, so form into logs the size you would see at the grocery store.


4)   Place on broiler pan and bake at 140 degrees for 8 hours (overnight or all day long).  We used our roaster so the oven didn't have to run all that time, but the lowest temperature it would go was 170 degrees, but this worked out ok.  They didn't take pictures of this step - if you want to look at a few, look at this link here - her recipe isn't the same though!
Mom and Dad D did steps 2 thru 4.  They said that the logs were redder-looking in color (like raw burger) still after all that baking, but that is the nature of the sausage.  It's not going to get brown like hamburger does because of the processing.  Trust me, after 8 hours of cooking, it's not raw anymore.
The logs aren’t the perfect circles you buy at the store, but don’t let that fool you.  As usual, homemade is a zillion times better. 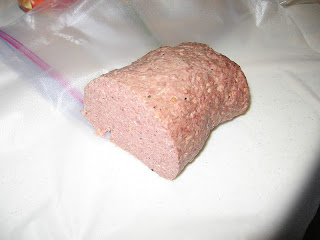 Just in time for the holidays, the perfect snack.  I’ll let Wisconsin keep making cheese, though.  I’m not interested in making my own cheddar*.
*Note: My friends HH and KH researched, for humor purposes, the option of making cheese out of HH’s breast milk when they had their first daughter (same age as KD and Easy Mac).  The consensus was that breastmilk doesn’t have enough milkfat in it to make good cheese.  I would’ve had enough breastmilk to make a lot of cheese (I was breastfeeding for two remember – no formula), but I’m pretty sure there would’ve been no takers on the breastmilk cheese, including myself.  Ha!
Posted by WOM-MOMS at 9:55 AM