We learned (or reminded of) four things at Girls Trip 2011:

1)   We have the best friends!
2)   We didn’t do too badly when picking a cabin, but…
3)   Grilled fruit is fracking awesome!
4)   We will be going back to the Bridge restaurant again next year for their Morgan smoothie cocktail – DA-LISH!!

First, as to picking the cabin, we didn’t do too badly.  Our place had good space for the 5 of us (plus baby EK), it had two bathrooms, ample sleeping and living space, a well-stocked kitchen, washer/dryer, nice yard and dock, and window air conditioners in every room.

The price we paid was decent, especially considering that we split it 5 ways.  One thing to think about when researching this: we only go for a long weekend, and we found a cabin that only charged us for the time we were there, not a whole week’s worth of use.

Another thing to think about, and you should ask beforehand, is what the check-out procedure is.  This is not the same as a hotel room.  We had check-out instructions, but these required that we wash all of the sheets and towels we used before we left.  The instructions said we absolutely COULD NOT leave the dryer running for hazard reasons, so we would have to stay until all the laundry was finished.  The checklist also said that the cleaning service people would come by at noon.  We figured that if the last load of laundry wasn’t quite dry before we left, the cleaning crew wouldn’t mind watching it till it was all dry.  But they never showed up.

So we waited till 12:30, then 12:45 (at which time Special Guest Steph left since she had a ways to drive which included meeting a cousin for coffee in Fargo and stopping at regular intervals to nurse baby EK), then 1:00.  That’s when awesome, gutsy Lori took matters into her own hands and called the owner.  Lori explained the circumstances and that we all needed to get home to our kids, and the owner said it was NO PROBLEM if we left with that last load running.  Well heck, we should’ve called an hour before!


I don’t remember everything the waitress said was in it (we were a little distracted by the fact that the waitress happened to attend the same college where Lori and Steve work in little city, ND), but I know it contained Captain Morgan spiced rum, pineapple juice and grenadine.  There were more ingredients, but I don’t remember.


I’ll have to go back next year and pay better attention.  While we sipped our cocktails (Special Guest Steph opted for raspberry lemonade since she didn’t want baby EK drinking Captain Smoothie thru her breastmilk) and ate our lunch, we gabbed, made fun of each other and overall felt like we were a pretty lucky bunch of girls to have each other. 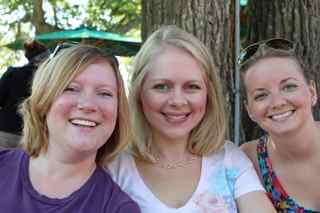 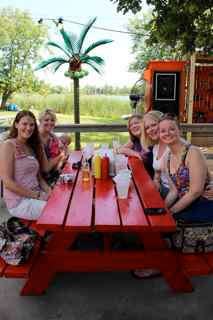 Third, and along those lines, man do I have some good friends.  To say these girls are awesome BFF’s is an understatement.  It’s not often that you have the privilege of knowing, and being best friends with, someone who’s known you since you were a teeny little kid.  God, we are lucky.  Thank You.  Amen.

Finally, we recommend that you take a chance on cooking with a charcoal grill if you have no other option.  I let Shaun do all the grilling, and I got the feeling that my friends’ husbands fulfill similar roles.  Special Guest Steph called this post ‘doing a man’s job sans the man.’ 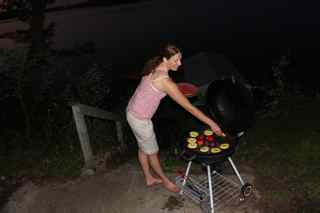 TC, or ‘Slags’ as we lovingly call her, took on the role of grillmaster.  It might’ve been that we passive-aggressively forced the role of grillmaster on her, but she took it well and did just fine.  We followed the overall rules and lit the charcoal briquets till they were gray and red-hot (this took about 30 minutes).  We pretty much guessed about how to cook the marinated pork chops Special Guest Steph’s dad brought us from our hometown, but we did pretty well.  They were juicy and tender.

CH, or ‘Grizz’ as we lovingly call her, suggested the idea of grilling fruit.  Since Slags is allergic to strawberries, those weren’t an option (though trust me, I suggested sneaking strawberries into nearly everything we ate/drank just to annoy her).  We opted for fresh pineapple slices and halved ripe peaches.  Slags put them on the grill till they were toasty warm and had grill marks on both sides.  The end result – BRILLIANT.  We served the warm grilled fruit with French vanilla ice cream (SGS, Grizz and Slags tried making vanilla ice cream from scratch and it wasn’t horrible, but rather didn’t have much flavor at all).  The outsides of the pineapple slices caramelized kinda like the browned outside of a marshmallow when you make s’mores.  They still were juicy on the inside.  The peaches pretty much turned into a sort of pudding texture.  Smooth, creamy and easily scooped out with a spoon.  So yummy.

[One last thing: if you are that loser mother who drives a teal-colored Nissan Quest minivan with ND plate # _____, we hope you got arrested when we called 911 to report you.  Seriously Friends, this loser buckled up her own seatbelt, put her toddler daughter between the front bucket seats (completely UNBUCKLED and not even in a seat!!) and drove off.  We were so appalled we sat in the Wal-mart parking lot as Lori called the police to make the report.]

Aside from the afore-mentioned appalling lack of motherly diligence, GT’11 was a complete success.  Next year, Lori and I will not miss the first 2 days because just being there on Saturday was NOT LONG ENOUGH! 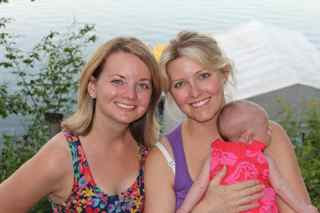 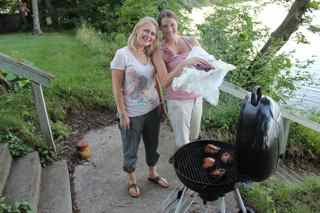 In summary, I quote one of the sayings Thrifty Nana (my mom) has had on her fridge since I was little: “Old friends is best, unless you find a new friend fit to make an old one out of.”
Posted by WOM-MOMS at 11:17 PM