Hide Yo Brushes! Hide Yo Blushes!

I had some really great ideas planned for today, but somehow, nada.  I made a turkey pot pie with store-bought biscuits which was tasty – but despite following directions, did not turn out well enough to be a blog post: it took over an hour to bake, despite one recipe’s directions saying 16-18 minutes and one recipe’s saying 30 min.  (When things were getting sketchy, I began to scour the helpful internets.)  I am positive, almost, that this cannot be my fault.  I blame my oven.  Why not a blog post?  Well, the outer biscuits were dark chocolate brown on top and the inner biscuit was still doughy in the center of my round cake pan.  Hmmm.

Thrifty Nana, Whit and I made a turkey dinner Saturday, complete with German Potato Dumplings.  This is totally blog-worthy, but we took so many pictures, it will take a while to narrow things down.  Tune in.

Plus, my computer was being an a-hole and wouldn’t work.  It’s a Mac, so I’m pretty sure there’s nothing really wrong with it – those computers are champs.  Still, I needed it in the clutch to write something and it let me down.  It had a time out.

Instead, I’ll tell you what my girls did this weekend.  They got up at 5:00 a.-effing-m. each day.  And they got into my make-up.  They used my best eyeshadow brushes in the crème rouges and shadows.  They destroyed my new highlighter/bronzer combo that is *one week old*.  They put ‘nscara (Emma’s term) and eyeliner on (really well actually, which scares Shaun).  And the best part of all – Emma has ringworm on her cheek, so everything she used, I had to THROW AWAY.

My make-up is now out of reach.  For now. 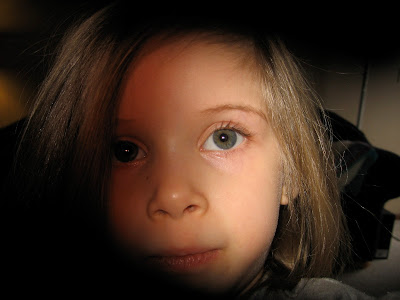 Correction - I used a pie plate, not a cake pan, and pie plate was acceptable per the recipe.