I have been dying over here.  There are so many things I’ve wanted to show you, but they are gifts for people and I couldn’t write about them or I’d give the gift away.

Some of my fave gifts this year have been of the DIY sort.  My sister-in-law, Mel, and I decided that instead of spending a lot of money, we’d make homemade gifts for each other, spending no more than $10 per person.  All of us are well aware how expensive Christmas can be.  And we’re all about THRIFTY!

And we thought that since we’re both addicted to Pinterest, what’s better than to say that our DIY gifts need to be something we found on Pinterest.

IT HAS BEEN SO MUCH FUN!  The hardest part was to narrow down what we’re going to do for each other; and I did have some difficulty finding a few things.

Mel and I both thought that the men’s gifts were harder to do since DIY ideas on Pinterest are not as prolific as kids’ and women’s.

For Rich, Shaun and I made a glass-etched plate that says “Rich’s Potstickers”, which are his fave app, and a glass-etched glass that says “Rich’s Girly Drink” since he likes cocktails rather than the beer that Shaun and Mel prefer (tho trust me, none of us has aversion to cocktails either).  This was awesome.  The glass-etching compound can be found at Michael’s (use your 40% off coupon) and you can follow the instructions from our blog post here.  This idea was put together from a few ideas I saw on Pinterest where people made votives and such out of paint and rubber bands (so you’d have a muted, lined effect). (The plate and glass cost less than $5 together and I already had the etching compound.)

For Mel, I couldn’t narrow down what to do for her.  I had some towel left over from making my own version of the Turbie Twist© and since I love mine, I thought she should have one.  This was of my own creation and pin on Pinterest from here. (This was a FREE gift since I already had the towel.) 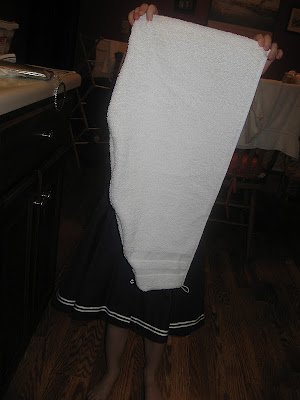 Shaun and I were big into making wine cork gifts this year.  He made bulletin boards for his parents, his sister and brother-in-law, and my mom.  He’d already made one for us and my dad and step-mom a while back.  They turned out really well. (These were FREE because I already had the corks and materials, and Shaun had the industrial-strength glue.) 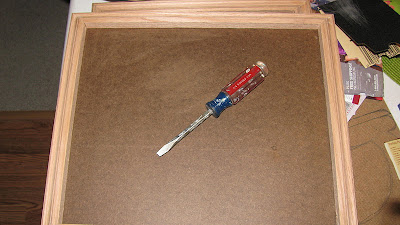 Along these lines, Lori and I made our cork letters here, and I’d seen cork coasters in Pinterest, so I thought: wouldn’t a cork trivet be AWESOME?  Well, that was a good thing for Mel, so I made her one of those (they just bought a house, so giving her house items is fun); while I was at it I also made one for Shaun’s brother and his girlfriend and my Secret Santa recipient at work, KS. (FREE)

The final gift I made for Mel was the most thoughtful (ie, it required a lot of thought).  I had seen on Pinterest where someone embroidered a heart in red floss around a certain map location that must’ve been important to them.  I put this idea together with ideas of things that have happened to them this year such as getting married, buying their house, going on their honeymoon (this January) and their usual Bears-Vikings rivalry.

So I got a map of our hometown of Williston, ND (Mel and I are from the same town), a map of the Isle of Wight where Rich is from in England and a map of the area of big city, MN where they just bought their house.  (These were FREE.)

I Mod-Podged the maps onto a white fabric canvas.  I arranged the maps like so: [Williston map] + [Isle of Wight map] = [big city map].  I put a glitter crystal on the exact location of our hometown, the specific part of the Isle where Rich’s home is, and the specific town they’ll live in here in big city – with a red ribbon heart around their new town. (Mod Podge is around $8 at JoAnn’s, but I used my 40% off coupon; the size canvas I bought was on sale for 60% off, so it cost about $3.50.  Plus, I’ll re-use the Mod Podge for other stuff and Mel and I decided that materials for the project which we can use on other stuff didn’t count for the $10 max requirement.)

Mel and I have already decided that this will be a gift-giving tradition for us now.  It took a little time but everything I did for it was super fun.  And Shaun and I worked together on making a lot of the gifts, so that was a fun thing for us to do together.