Posted by Ethne~
I was home with Easy Mac today, who is sick.  Ear infection.  Yep, January 4th and I’ve already used one of my vacation days up.  Crap.
But I won’t let that get me down.  Not when there is such good TV to watch.  How rare to have a day when I have nothing better to do than take care of only one child (?!?!) and watch TV.  Now for all you nay-sayers out there, hush, I did more with my child today than watch TV, but man, I loved being Mama Couch Potato today.
My latest craze: GLEE!  How did I go on for the past 2.5 years without watching it?  It’s an OUTRAGE is what it is.  We’ve been streaming Season 1 through Netflix on the PS3, then Season 2 just arrived and we flew through that.  The hair on the back of my neck stands up when I watch the end of the first episode when they belt out ‘Don’t Stop Believin’’ in their red shirts.  And I’ve been humming ‘Marry You’ all day long from the episode where Finn and Kurt’s parents get married.  I’ll say it out loud:  I totally have teenage crushes on Finn and Puck (I literally looked at a photo of myself in my football cheerleading uniform today for full teen immersion).  Something about those brown eyes gets me every time.  And I kinda like the mohawk Puck has going on.

Seriously, Friends.  Ya gotta watch it.  Shaun conceded to me subscribing to Hulu Plus last week so we could watch Season 3 thus far and get fully ready to watch when current episodes resume later this month.
With the kiddos, it’s kind of a blessing and a curse.  They love to dance to the music, and Shaun and I can stomach the repeated viewings of the shows because the music’s really good.  Tonight when putting the girls to bed Easy Mac told me that she likes Finn and Rachel better than Flynn and Rapunzel.  Ok.  I then called them ‘Finnchel’ and KD blurts out: ‘Finncheladas’ (which were what we had for dinner tonite – enchiladas).  So cute.  The curse: I turned off the Season 2 Christmas episode when talk of believing in Santa came up.  I didn’t want them to start asking any questions.  BUT Easy Mac threw it down like Donkey Kong.  We’re talking serious tantrum.
And my latest fave TV show quote is from Puck.  When he got out of juvie he told his probation officer that his community service would be ‘hanging with a crip’, meaning Artie, the Gleeker in a wheelchair.  It’s horrible, I know, but don’t judge.  We laughed for several nights over it.
Which leads me to my first, most-favorite TV quote ever: ‘Cock$ucker’.  Ya, I know, family friendly blog.  But if you’ve ever watched ‘Deadwood’ on HBO, you know what I’m talking about.  Calamity Jane is brilliant.  We own the series on DVD, and it’s a go-to for anytime we feel the need for a marathon, along with our other two faves – ‘Band of Brothers’ and ‘Pacific’.  Which brings me back to Glee – one of the main character Marines from ‘Pacific’ is Mr. Schuester in Glee.**

Now I’m going to really blow your mind.  Wanna know how this ramble ties in with Shaun’s and my other latest favorite show, ‘Sons of Anarchy’?  Yep, that’s right.  Calamity Jane.  That actress is the bike gang’s smokin’ hot lawyer.
She’s not why I watch the show tho.  I watch the show because the Sons of Anarchy gang VP is named Jax and he lights my fire.  I’m not really that into tats and law-breaking, but there’s something about Jax’s bada$$ness that made me tell Shaun that I wanted him to join a biker gang.  He didn’t even roll his eyes.  He just said that he is too old to start out as a prospect for a gang – he would want to be in upper management by now, not starting at the bottom of the barrel with the dirty work.  (BTW, I did not ask Shaun to shave his head into a mohawk.  Remorseless killer, yes.  Shave off half his hair, no.  I have standards.)

That’s a joke.  Oh, and a shout out to you, Motion Picture Association of America – KD and Easy Mac do not watch this with us.  We totally get the adult rating on that one.  Hello, Jax’s butt has appeared in several episodes.  Explaining some of the teenage-level subjects to KD and Easy Mac is hard enough, hence turning off the Santa episode of Glee today.
Ok, now that I’ve rambled about pretty much nothing for 2 pages, I’m interested~  Do you guys watch these shows?  Am I out on a limb when I say that I’d totally have a foursome with Jax, Puck and Finn (let’s throw Mr. Schuester in for good measure)?  Have a nice Thursday!

**UPDATE: For quite some time now, I've known that James Badge Dale is really the actor who plays the lead role in The Pacific, not Matthew Morrison, who acts in Glee.  However, I love this post, so I am not about to change it.  But here's a picture of Mr. Dale.  He and Mr. Schuester do look rather a lot a like, to my credit. 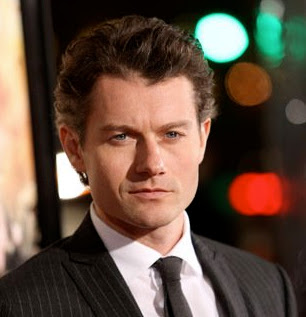 Email ThisBlogThis!Share to TwitterShare to FacebookShare to Pinterest
Labels: random, tuesdays at noon