I determined that my pantry had had it.  Or…I had had enough of my pantry.  Either way.

Shaun and I live in a great rambler that was completely gutted a few years ago, and the guy who re-did it DIY’d the whole thing himself.  The only thing Shaun and I have done is add on a deck, and I really haven’t wanted to do another thing besides art and family stuff.  I like the wood floors, the carpet, the tile, the paint colors.  I really wouldn’t change a thing.
The VERY BEST PART is the entire house has awesome storage space, which is unheard-of for ramblers of the 1950’s and 1960’s era.  At least in big city, MN.  It was bizarre the thinking back then.  Anyway, I have super storage, including my largest of 3 pantries in the kitchen (I know, it’s out of control).
But the thing is, when you have that much storage, you can take it for granted.  Shaun and I kinda-sorta put things in certain spots when we unpacked groceries, but kinda not.  And pretty soon, the pantry was a mess, with cereal and chips here, there and everywhere, and my candy stash right where the girls could get at it – OY-VEY!  (That’s German to the Norwegian UFF-DA!)
Here’s a picture of the mess as I began to take it all out of the pantry. 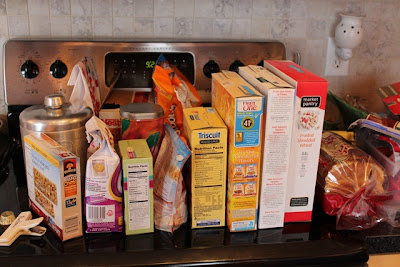 And then here are all the pull-out drawers (I know, ROCK ON) now.
Snacks, chips, crackers, candy and granola bars on top – the hardest place to reach for the girls.  I put the candy in a snapware plastic container, in the back, so the girls really can’t see or get at that at all.  For a while at least. 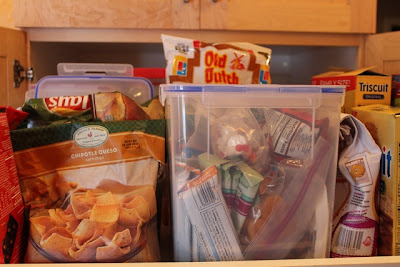 Next shelf down has bread, cereal, oatmeal, my cork jar (where Shaun and I collect our wine corks), sugar, flour, a spare bag of chips (since it was jumbo) and goldfish (I don't mind if the girls snatch those). 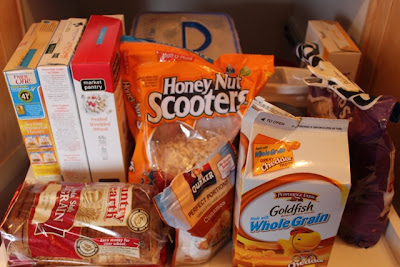 The third shelf down has our dried goods like pasta, mac-n-cheese, couscous and so on.  It also has my Sodastream drink flavorings which I put in a heart-shaped tin that Shaun had given chocolates to me in a long time back and I found in my office at work, collecting dust.  That is also Shaun’s keurig coffee pod shelf, but he was really low on the day I took these pictures, so there weren’t many to see.

At the bottom, there are paper plates, cups, napkins and the like (let's face it, I only keep the mini Dixie cups around for Jello shots, but who can dispose of such a useful item?!).  We don’t use them often, but want them accessible when we do.  We mostly use cloth napkins which I’m a big proponent of.  Also down there are potatoes, onions and a miscellaneous item or two.

Now since I did the organization, I could pretty easily keep this sorted out.  But Shaun wouldn’t do as well; not for lack of intention, but it just would fall apart after a while.  I’ve discovered that on the whole, Shaun is a far better and more frequent cleaner in our marriage, but when I clean, I tend to be a better and more thorough organizer.  As in, when he cleans up the girls toys, he throws them in the toy box.  Sure, this cleans the space up; but when I clean the girls’ toys up, I sort the toys into their respective stations, like Barbies, babydolls, kitchenwares, books, drawing/crayons, and then only the random miscellaneous leftover stuff goes into the toy box.  But I love him for cleaning up after us.  I’ll just keep organizing up after us.

ANYWAY, in order to keep this new pantry organization going for as long as possible, what I did was use the new (to me) 3M post-it labels that are sticky across the back of the entire label.  How awesome is that???  I labeled each shelf twice, and hope it does the trick!

I’m impressed with myself anyway.  And best of all, no little KD or Easy-Mac have been sneaking candy from the pantry either.
Posted by WOM-MOMS at 8:37 PM