Posted by Ethne~
By pure coincidence, it is organization week on one of our fave blogs, younghouselove.  The reason it's coincidence is that it is *forced* organization week in the D household since we just moved.
You know how when you move you realize you have waaaay more things than you ever thought you did?  I didn't think this included me since we lived in a condo and had pretty limited storage space.  And Shaun keeps things fairly organized (shelving in the garage, etc.).  Well, let me tell you, I am totally in the way-more-stuff category.  And then some.

I promised Shaun, myself and God that I would de-clutter my house - which means mega-organization and lots of getting-rid-of.  Friends, let's just say that starting May 1, 2012, I am a WOMAN ON A MISSION.
As I said in yesterday's post, I was pretty sick and a lot of the organization occurred with my blessing, but without my help.  Kinda makes you realize how much your family loves you when they take on more than their fair share of the moving process.

One place I played very little part in was my bathroom.  Shaun gets his own bathroom now, so this one gets to be all me, but mine is the bathroom on the main floor, so I want it to be really nice.
And are you with me when I proclaim that bathroom stuff can get out of control in a flash?  Holy cow.  I thought I knew where everything was, but I could tell things were piling up.  One example: feminine products.  Evidently I kept buying and stashing and buying and stashing, and never USING UP said products.  Not thrifty AT ALL.
My sister-in-law, Mel, came to the rescue.  She sorted everything into categories and assigned each a coordinating storage container.  She then pulled me into the bathroom and told me to pick 'X' number of lotions, for example, to put in the assigned container.  If I had two of one product, like lotion, she consolidated into one bottle.

Mel threw everything that was past expiration date, even before I saw it.
Any product I did not keep, but which was not expired, I donated to the students at my mom's school.  The girls in her classes love the Bath & Body Works type of products.
Sometimes a little tough love was required.  Mel let me keep 2 body washes in the shower (since I go with the scent that suits my mood) but she didn't allow me to keep two others in the closet then too. 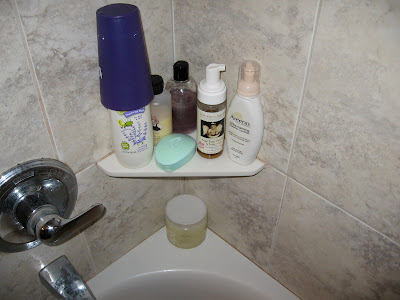 Here's how the containers came together (a big hoorah for the designer of the storage space in our house - we have a TON):
Emergency items (those sit closer to the front)

Medical items (those were given a larger container)

Daily items (divided into a couple of sub-containers including my contacts stuff; face lotions, hair brushes and deodorant; and daily make-up) 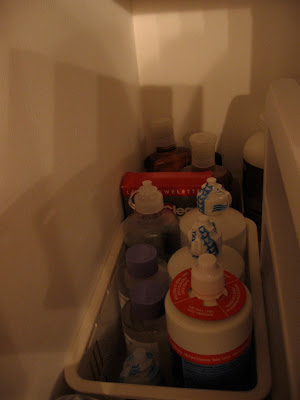 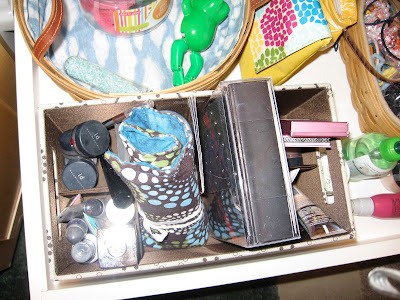 Nail polish (I have a lot)

Other make-up (I have a lot, don't judge - it's organized and either gets used or shared on a regular basis) 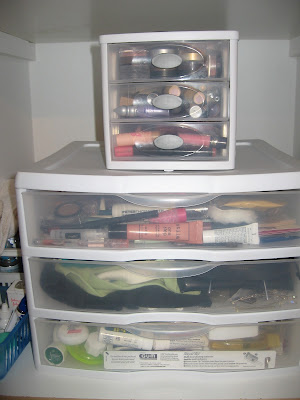 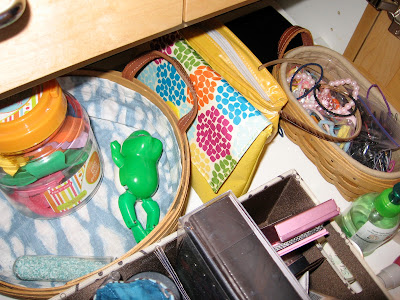 Didn't she do a great job?  Mel and my mother-in-law (Mom D) also decided to pull out some of the towels I've had since college and they either became donation or rags.  And then Mom D bought me a new green rug and coordinating green and taupe towels.  This is a new color scheme for little old me.  I'd always leaned toward purple, blue and pink in the bathroom before (mainly blue in deference to Shaun) and now Mel, Mom D and my other sister, Heather's, style of natural colors like greens, taupes, chocolates and gray-blues are rubbing off on me.  I'm hip now.

Last but not least, check out how I organize my curling irons: it's an old dishwasher silverware basket.  If you put the iron end down into the basket and wrap the cord nicely so it's not getting tangled, it's the perfect storage solution.  That's all my creation.  Impressed?

And one last thing - sweet kitty Theodore was not forgotten.  He may have gotten into a small hole and stuck between the flooring/ceiling at the condo, and I may have had to lure him out with treats and then the scruff of his neck (no other way to grab him) BUT he got a new collar out of the deal and one of the old comfy purple bath mats became his new luxurious rug leading to and from his litterbox.  He loves purple I'm sure.