The other night I needed a super easy dinner and I was inspired by my friend Michelle’s recitation of her latest enchilada recipe that had chicken, chorizo sausage and a tomato base.  She sent me the recipe, but naturally I didn’t have any of the ingredients on hand – when I do, I’ll make it and tell you about it cuz it looks amazing.

In the meantime, I was going for a PURE-LEFTOVERS enchilada hotdish.  Last Sunday I made homemade flour tortillas, but those had hardened in the fridge and weren’t soft enough for tacos anymore.  Perfect for layering as lasagna noodles, enchilada style, though!  I always keep taco seasoning on hand, so no worries when we want easy Mexican.

Here’s what you need:

-A quart/large can of stewed tomatoes and a half-can’s worth of water
-Leftover cooked chicken, chopped up (I had a breast and a half)
-9-12 flour tortillas (slightly dry and crusty are fine; they’ll soften up)
-1-2 packets of taco seasoning (I found that I wanted two for a nice Mexican taste – just add one at a time so you don’t over-do it)
-Fresh frozen baby spinach leaves (you can use non-frozen – I just freeze my fresh so they last longer)
-Cooked rice (about 1 cup)
-Shredded cheese (I had a bag of cheddar jack so that’s what I used) (probably about 2-3 cups)

Preheat your oven to 350 degrees.  Spray a rectangular baking dish with cooking spray.

Bring the tomatoes, water and taco packet (the first one) to a boil on medium-high heat.  When it comes to a boil, turn it down to a low simmer for a few minutes, then taste it and see if you want to add more taco seasoning; if so, do it now.  Then add the chicken and simmer for several more minutes.

While the chicken is simmering, slice the tortillas in half. 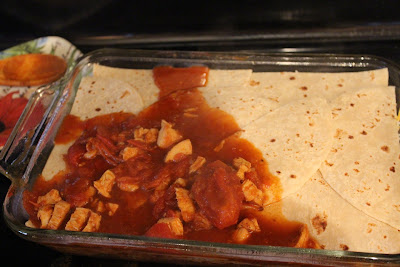 Cover this next layer with the rice, spinach and half of the cheese.  Now another layer of tortillas, no gaps.  Now top with the remaining sauce and cheese. 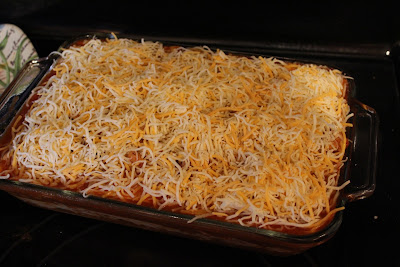 Bake for 30-40 minutes until it is all hot and bubbling.  Yummy!  The kids asked for seconds and that is RARE since they would rather do just about anything than take time out of their day to eat. 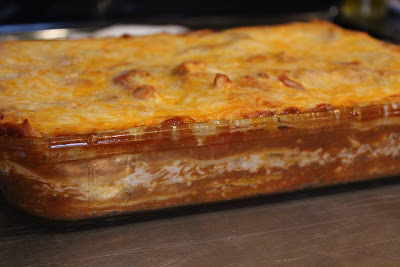