I thought I had written this recipe up for you all once before, but I checked and I guess not!  I know I’ve made knock-off PF Chang’s lettuce wraps for the hubs and tater tots.  Here it is, properly documented.

If you have a PF Chang’s near you, you are doubtlessly familiar with their lettuce wraps.  Tasty chopped meat mix served with a pile of whole lettuce leaves, to eat taco style.  In fact, I told the girls they were Chinese tacos.

These tacos wraps are super easy to make, and relatively guilt free, given that they have nominal carbs in them, and are light in calories and fat (though I do not have a breakdown for you).  I found several recipes on Pinterest, but as is my usual, I globbed several together, so this is basically just my recipe now.

2 T olive oil
1lb package ground turkey
½ medium yellow onion (finely minced)
Salt & pepper, ¼ t of each
2 large cloves garlic (finely minced)
1.5 to 2 inch piece of fresh ginger (finely minced – sometimes I grate ginger to be lazy, but I think you should mince it for this recipe)
1 T sesame oil
3 T soy sauce
1 T water
1 T peanut butter
½ T honey (be sure you buy real honey, not the fake stuff)
1½ T rice vinegar
2 t chili garlic sauce (this is in the Asian foods aisle at your regular grocery store)
3 green onions (thinly sliced)
2/3 of an 8 oz. can of water chestnuts (finely minced - use the whole can if you don't want to waste)
10-12 large, whole lettuce leaves, washed and patted dry

Chop everything in advance. 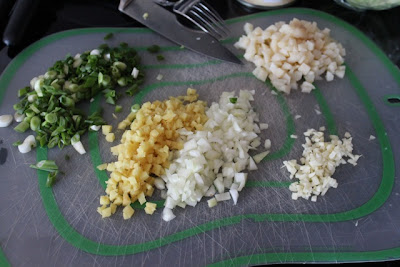 Heat olive oil in a large, non-stick skillet on medium-high heat.  Add turkey, onion, salt & pepper and cook until turkey is nearly done, stirring often so the meat doesn’t stick to the pan and to break up the pieces of meat to pea-size.  When the meat is almost done, add in minced garlic & ginger and continue cooking until the turkey is cooked through.

While the meat cooks, into a microwave safe bowl, combine sesame oil, soy sauce, water, peanut butter, honey, rice vinegar, chili garlic sauce and another dash of black pepper (for good measure).  Microwave for 25 seconds, then stir until smooth.  Add into the skillet and stir to combine.

Add green onion and water chestnuts into the skillet then cook for 2-4 minutes until the whole pan is bubbling again.  Turn the heat off.

Serve with cold lettuce leaves.  This is kind of hard for the kids if your leaves are standard iceberg lettuce, but that’s what we had.  Fancy Butter or Boston lettuce would probably hold up a little better.  Regardless, the kiddos told me it was delicious, even though I had put "seasonings" in it.  I'll take that as a win. 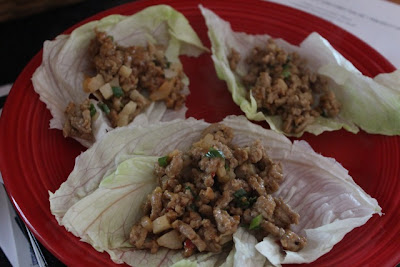