Posted by Ethne and Lori~

Lori and I have been so excited to reveal these projects, and we wanted to do this a few days earlier, to go with the first day of the Summer Pinterest Project reveal on Tuesday, but we had to wait…these projects are for a SURPRISE SHOWER (we even gave it code initials – SS) for one of our our best friends, Grizz, who is expecting her first child in November.  We are thrilled for her – and we knew we couldn’t dare chance to ruin the surprise because she is one of our most LOYAL Wom-Mom followers and reads the blog every day.  If she saw the post any time before the SS on Friday, the gig would be up!

Luckily for us, this weekend is Girls Trip (!!!) and we are going to throw her the SS for brunch today – since we couldn’t wait any longer anyway!!  If planning goes well, and hopefully with a little help from Shaun and Steve, this post will go up simultaneously, and will also be linked up with our fave blog Younghouselove so we can share the love with a whole bunch of you!  Check the link to all of the Pinterest Challenge Projects on their blog here.

So these were the projects that Lori and I did.  We had so many more ideas, we just couldn’t get them all in.  For the most part we used items we already had in our stash; we only purchased a few new things.

My girls and Mur-Man all loved Soothie pacifiers best of all.  I didn’t know about Wubbanub pacis till after the girls didn’t use them anymore, but had a couple and I thought they were the cutest things ever.  What a genius idea to have a stuffed animal attached to a pacifier – it makes it easier to find in a diaper bag; easier for the munchkin to hold onto once they start grasping; it is something for baby to look at – all around brilliance.  Seriously, why didn’t I think of this?!  I went to the Wubbanub site and pinned this to our Wom-Mom Pinterest page immediately so I could refer to a picture.

Well, I knew I could make it.  As with many kids, the girls get way more stuffed animals than they can ever play with.  When these dogs I used came into our house, I sneakily pulled them aside, knowing exactly what I wanted to do with them (we have two dogs of course, like we have two of everything).  They are super lightweight, are that velvety soft material, their bodies lay flat and they have a seam across their mouths making it easy to insert the paci.

What I didn’t know is how I would attach the pacifier to the dog.  I asked Lori and Steve and they said to use heavy-duty thread.  I only had heavy black thread, so I went to Joann and bought some Sulky clear thread, which was on sale for 50% off - $1.99!  I purchased a 2-pack of Soothie pacifiers (which are made by Avent evidently, but we got all of ours at the hospital when they were born) at Walgreens for about $3. 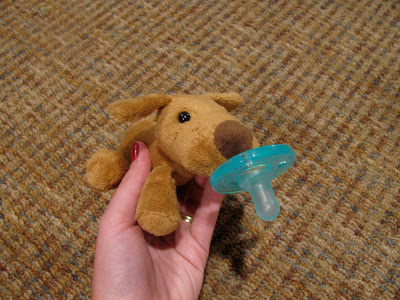 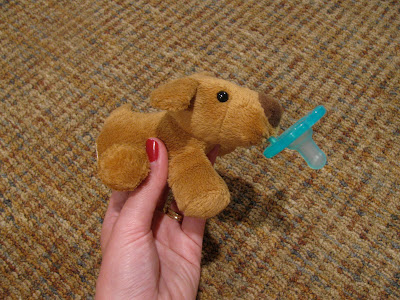 I have never sewed a pacifier before, so I do not know how long it will hold up, but I hope that Baby H will get some good use out of it.  The double-sewing should help it to last. 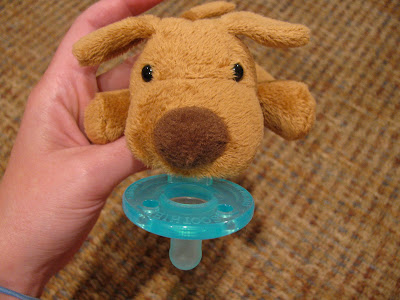 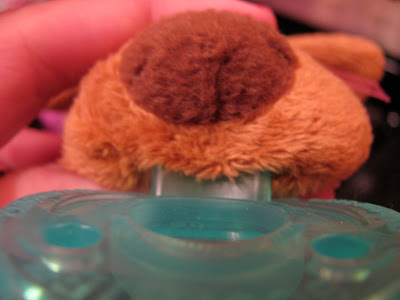 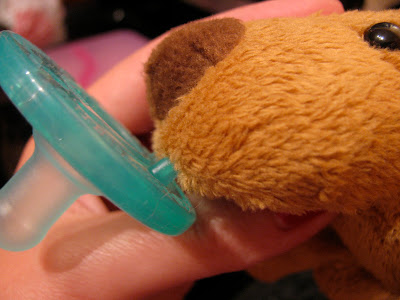 Finally, Since Baby H is a girl, the dog needs to be a girl too, so I sewed a pink bow on one of her ears.  I purchased some Stop Fraying glue at Joann (with a 50% off coupon) to keep the edges from getting frazzled after much use. 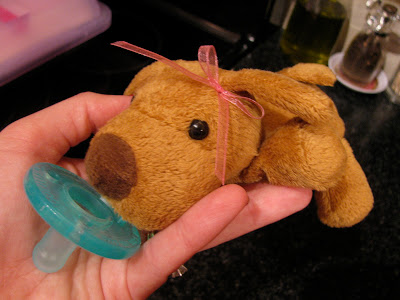 As for cleaning, the dog can be washed in the washer on the gentle cycle (preferably in a garment bag) and air dried.  The pacifier can be sterilized by holding the pacifier portion into a pot of boiling water for 1-2 minutes.

I fished around from Grizz if she and her hubby had decided on a baby name yet, since we could have so much fun crafting with that information.  They aren’t sharing.  Ahhhh!  But she did tell us what baby’s nursery colors are: pink and brown.  Lucky for me, I found perfect match scrapbook paper for $0.20 at Joann and a 5”x7” canvas for $3 (50% off).

I knew just what I wanted to do with it.  On Pinterest I had pinned (it wasn't from a blog, so I can't credit anybody) a little piece of art that says: “Not everyone can be a Princess…Someone must clap as I pass by.”  This is just PERFECT.  So this Sunday I got out the good old Mod Podge, some decorative items like glitter gems, pink flowers, ribbon, and the wax seal stuff from my wedding invitations (7 years ago!!).

I applied a layer of Mod Podge with a cheap black sponge brush over the entire face of the canvas.  I then layed this down onto the center of the back side of the scrapbook paper.  Now flip it over and smooth out wrinkles and air pockets as best you can.  You are applying paper onto fabric with glue, so it’s not going to be perfect, but the nice thing about Mod Podge is it will smooth out once it is fully dry – not 100%, but 90%.

Now flip the canvas back over and on one of the 5” sides, apply a layer of Mod Podge onto the canvas portion and fold up the paper, smoothing it as best you can.  Hold it there for a few moments.  Do the same for the other 5” side.

Turn now to one 7” side.  Apply Mod Podge to the canvas as before and fold up the sides, holding for a moment.  As you do this, crimp the corners to a crisp point where they stick out, and fold them inwards.  Mod Podge is like glue, so you can apply some into the crease of the paper to help it stick together.  I then folded the corner points inward onto the 7” sides.  Do the same for the other 7” side. 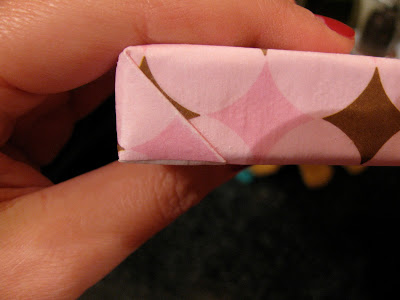 Lay the canvas on its back.  Smooth the paper out again onto the face of the canvas.  Be careful not to tear it because the Mod Podge will be soaking into it.  Basically, press out creases and air bubbles as best you can.  Now with your brush, apply a liberal, but not gloppy layer of Mod Podge over the face of the canvas.  I like it all to go one direction, from left to right.  Do this also for the sides so that everything is coated with Mod Podge.  Make sure that the turned-down corners of paper on the 7” sides are pressed down really well now since this is the point you are sealing them.  Don’t worry that the paper is really clouded over – Mod Podge dries clear! 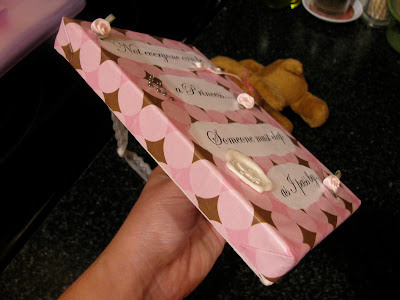 Wait until the Mod Podge is no longer tacky – it doesn’t have to be 100% dry – an hour should do.  You can now apply whatever else you’d like.

While I waited, I printed up my lettering for the quote, and tore the edges around it so they looked rough like an old-fashioned scroll.  I tied a little ribbon and found some coordinating ribbon flowers.  I found some clear crystals and a piece of lace for hanging the artwork on Baby Hintz’s bedroom wall.  And I had Shaun melt some shimmery white sealing wax from our wedding onto wax paper and stamped a fleur-de-lis onto it.  I thought this would be a nice royal flourish.

Once the canvas was ready for its next layer, I Mod Podged the lettering onto the piece, which just took a few minutes, and let it dry again. 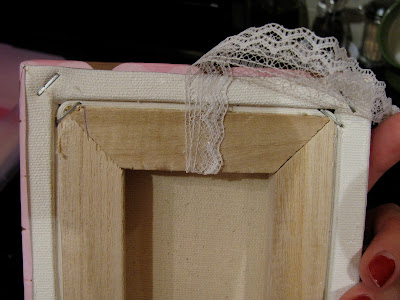 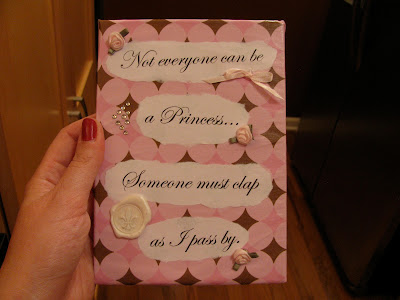 Finally, I applied the embellishments and hanging lace ribbon with my glue gun.  DONE! HOW EASY?! Isn’t it the cutest thing ever?  I have some extra supplies from this project which I’m thankful for because I can think of a few other princesses who need this plaque!

For Lori’s baby shower, she got these great homemade flannel burp rags from a good friend.  And if you scour Pinterest as we did for projects for Grizz (our other GT bffs Steph and TC did homemade gifts too, so we were all in on it – but I don’t have pics of their projects yet, so we’ll post those next week) you can find lots of ideas.  But Lori and I decided we still liked hers best of all.  They are curved like a kidney bean. 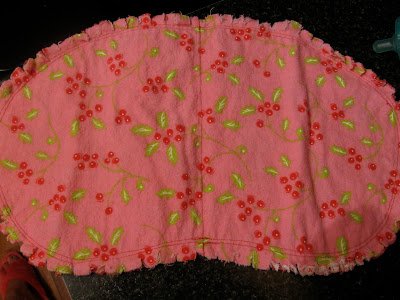 I didn’t have a pattern, so I just made one up.  The pattern I made up is __” long and __” wide at the center point.  Then I just cut it into a rounded bean shape.  Easy enough to make up.  If you don’t feel certain, just make it square.  But the bean shape is nice because it curves around your neck when you’re burping baby.

Important First Step: and dry your fabrics first – especially flannel – because putting different fabrics together, without being pre-shrunk, could cause problems.  When they’re all sewn together, and they then are washed and dried for the first time, they could shrink in different increments, causing weird puckering.

Sandwich all the layers together and pin them really well so they don’t move around on you while you sew them.  Sew a straight line down the middle.  Sew all the way around the edge of the burp rag, leaving a ½” seam.  Now snip the edges, about ¼” apart, being careful not to cut your stitching though!  Wash again and the edges will get all fluffy. 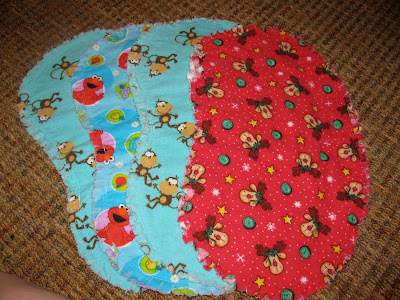 so crafty wom mom! Inspired me to make one!