Remember the DELICIOUS slushburger recipe we made a few months back, which originated with my bff Teresa’s mom, Barb?  You can click here to check that out.  Trust me, it’s awesome.  I’m happy to announce I’m back with another Barb masterpiece.

This time, it’s her famous pickles.  And it’s so valuable a recipe that I was wise enough to write it down when I was in junior high.  I knew I had it written down, but when I pulled it out to make the pickles last week, I recognized that it was my writing from that era.  Isn’t that cool?  I was clever even back then; and I knew one day, I’d thank me.

I’ve always been so-so on cucumbers.  My sis Whit can eat them off the vine with a vengeance.  Not me.  I don’t like the seeds in the middle.  I like the English cucumbers, and as an adult, I’ll eat any cucumbers pretty well.  But nothing’s better than a pickle.

Thrifty Nana (my mom) and her mom, and her mom before her, can some killer sweet pickles.  Two versions.  One is the sliced sweet 'bread and butter' pickle you probably would be familiar with.  One is called ‘company best’ and they are dyed deep green.  I give them total props because their recipe is great, but I really have never been a lover of sweet pickles.  I’m a dill kinda gal.

Barb knows how much I love her pickles.  We only lived 3 houses apart my whole life in Williston, so I would run over there at any hour of the day or night and let myself in.  I knew the code to their garage door if the door wasn’t unlocked.  Of course that meant I helped myself to their fridge, including plenty of pickles.  Since we’ve moved away after high school, Barb and Teresa always seem to keep me supplied.  Barb brought me pickles for Teresa’s wedding last summer – and Teresa gave us each a jar at Girls Trip last weekend!!!

Steph couldn’t take hers back on the plane with her, so we finished her jar off, lock stock and barrel, including the cabbage and garlic clove, which are one of the magic elements of the pickle recipe.

So without further ado, and straight from my own junior high genius (plus an addition from Barb later on), here it is.  It’s amazingly easy and quick.

To prepare, purchase some wide-mouth quart-size glass canning jars.  Both Thrifty Nana and Barb use Kerr brand, but if you can’t find that, Ball or other brands will be just fine.  You will also need wide-mouth canning ‘flats’, which are the lids with the plastic seal around the edge and the wide-mouth 'rings' to screw the flat onto the jar nice and tight.

As it turns out, Thrifty Nana and I had some small-mouth quart-size jars, so we used some of those rather than buying more jars.  When you can on a regular basis, you amass plenty of canning supplies and jars can be re-used.  Flats cannot be re-used, however.  The wide-mouth jars are much easier to pack with cucumbers, though, so I recommend those if you have them or are purchasing them.


Whit and I planned to can pickles (she’s a fanatic of Barb’s pickles, and she hasn’t had the benefit of eating them all these years because she lived far away and, trust me, I guard them with my life anyway) when we planted her garden this year, so she has cucumbers growing.  Thrifty Nana has dill growing in her garden, so we’re set there (though she must’ve weeded some out because we don’t have as much there as we thought) – a bit of a crisis.

These cucumbers, though, are from TN’s sweet little neighbor lady.  She planted veggie plants all over her yard and has quite a few cucumbers.  She proudly brought a few over to TN.  They are small, and have little seeds, but they are not small enough to be the traditional size of Barb’s pickles.  No worries, I just cut them into slices.  We picked a couple of babies from Whit’s plants too. {Note: since I wrote this post up, TN's neighbor lady gave Whit and me another 10 gallon pail full of cucumbers.  We canned nearly 20 quarts of pickles tonight - hence the dried dill!}

This makes what I call the pickling ‘brine’.

IMPORTANT STEP:  The night before canning, wash the cucumbers and put them in a bowl of water, then in the fridge.  Take them out ½ hour to 1 hour before canning the next day to bring them back to room temperature.  This will prevent them from getting mushy as pickles.

Right before canning, wash your jars so they are absolutely clean before use.  TN and I just run them through the dishwasher and take them out as we fill them.  Have your flats and rings right at hand too.

In the bottom of each jar, place finely-chopped (1/2”-1” size pieces) pieces of cabbage about an inch high in the bottom, and one good-sized clove of garlic.  Place in one whole frond of dill, seed-tops and all. 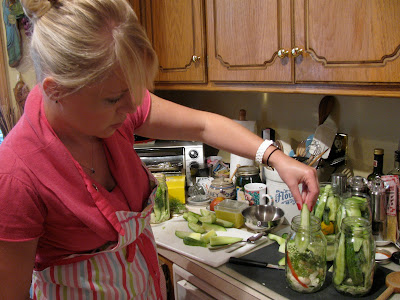 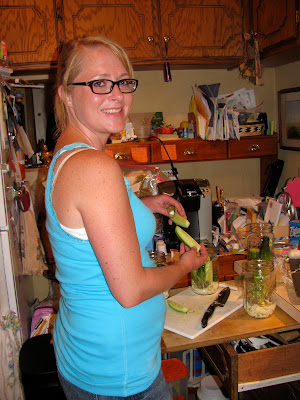 Place the flats in a small pot of water and put on the stove, bringing it to a low boil.  Simmer the flats until you actually use them. 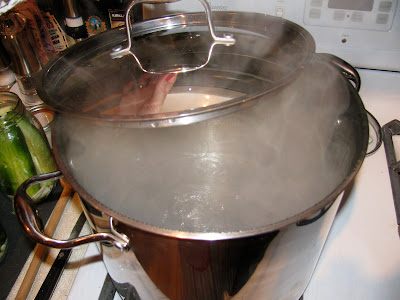 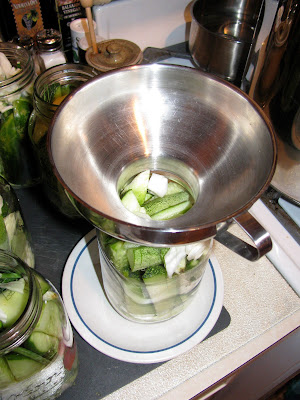 Within a few minutes, you should hear a little pop as the flat seals down.  If this doesn’t happen, it means the jar did not seal and that the pickles cannot be shelved indefinitely.  All is not lost though; place the un-sealed jar in the fridge and eat it in a month or so.  If you are not certain you heard a pop, you can tap on the lid; if the lid makes a hollow, tinny sound, it means it sealed; also, when it seals, it sucks the lid in, so the lid will either be flat or the center will be very slightly indented (depending on the type you bought).

With the sealed jars, they may be placed on your cupboard shelf (we put them in the basement shelves so they don’t take kitchen shelf space) to pickle.  Barb says they have to wait for a year to be eaten.  While this seems like forever, trust me, it’s worth the wait.  And the longer you wait, the better they get.

So, Junior High Ethne, I salute you.

And Thanks, Barb, for answering questions I had on Wednesday as I canned!
Posted by WOM-MOMS at 11:23 PM

Ethne,
Teresa told me I was "featured" on your blog today. I just read it and laughed till I about cried. I do miss my third daughter down the block! I'm honored to have been a part of your blog today. Also, the quilt you and your mom made is gorgeous! - Barb

Glad you liked the post Barb! I'm saving my Girls Trip jar of your pickles for when Dad comes to town next week. He revealed last week that he adores them. He doesn't get to TAKE them home, but he can EAT some. :) Miss you. E