The Vikings birthday parties are over, and it all went swimmingly.  Party one with Shaun’s family – but I almost completely forgot to take pictures, remember?

Party two with my side of the fam, including Whit's boyfriend's son, AJ.  The girls got along great with him!

Amazingly, I discovered that putting on a six-year-old girl’s football party was cute, in spite of myself.  Who knew?  I purchased a football-themed bowl and platter, as well as beads and cheering gear for the kids, plates, football lanterns and a fiki football set from Party City online.  They have all your college and professional teams to choose from, so Minnesota Vikings it was.  Shaun couldn’t even argue.  It was his fault after all. 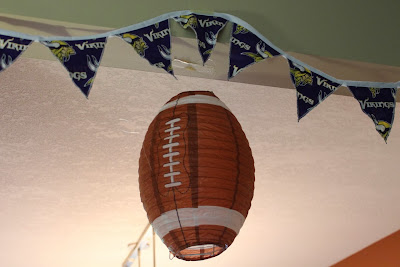 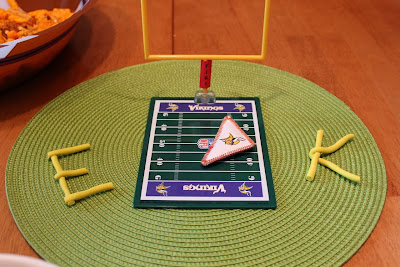 I found other decorations at Target dollar spot and I made the pennant banner with Vikings fabric from JoAnn (40% off coupon).  I THOUGHT I had a football tablecloth in my stash (or I would’ve purchased one) but when I went to get it from its spot the morning of the party, it was AWOL.

We served traditional football snacks (think Super Bowl), and our dinner meal was chili with cornbread – we made two types: white chicken chili and regular red beef chili.  We had beer, pop and Gatorade for the kids. // On the other party day we had rotisserie chickens, mini tater tots and a variety of frozen steamer vegetables I had found on sale (I love those, and so do my kids).  I splurged on the Honeycrisp apples my mom used to make the apple cobbler for dessert (instead of cake). 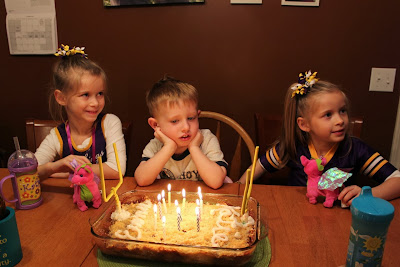 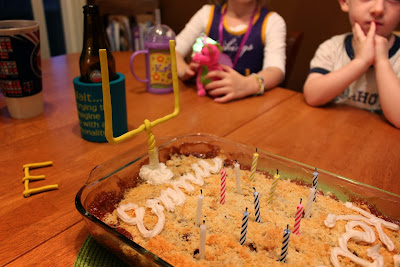 For the first party, I made one yellow cake with chocolate frosting in a 9x13” pan, then cut that in half and put one on each end of the table to be like end zones.  Thrifty Nana (my mom) and I made yellow goal posts out of moldable, bakeable clay you can get at JoAnn – the kiddie kind is non-toxic and costs lest than $2.

Of course, KD and Easy Mac needed outfits, so I tracked down Vikings gear from Justice girl’s store.  Super cute.  Glitter and all.  It’s possible Shaun threw up in his mouth when he saw the glitter, but he couldn’t say anything BECAUSE THE PARTY THEME WAS HIS IDEA.  ;)  (Dad and Mom Connie are coming this weekend for the girls’ third birthday weekend and their gift is to take the girls to Justice to let them pick out an outfit.  Dad’s never been there so I told him to bring his sunglasses because there’s so much fluorescent in there his eyes could melt out of their sockets.)

Next year, I’m rooting for a Spiderman party since we have totally done princess, vampires and sports and I’m over it.  In the meantime, I’ve got a darling Rapunzel and Sleeping Beauty to get prepped for Halloween.  I was rooting for ghosts, but princesses won out, once again.  (KD tossed around being a piece of candy corn, but settled on Aurora which I was ok with seeing as I didn’t feel like making a piece of giant candy.)
Posted by WOM-MOMS at 7:51 AM