Posted by Ethne~
I made tooth fairies for the girls for their birthday.  What prompted this was not my innate desire to make tooth fairies or celebrate their aging.  In fact, I’m afraid of their aging.  I’d rather they’d stop for a while and just be my sweet little girls and not lose their teeth and go through that gawky awkward stage.  [I do have hope, though, because my friend, KS’s girls pretty much skipped awkward and went straight to adorable, hipster (albeit sometimes sassy) tweenagers.]

But KD told me recently that her bottom front tooth is loose.  I didn’t check it to see because I’d rather not even believe that’s possible.  It’s not possible.  Just to verify my ignorance being truth, I asked my friend, SH, who has a daughter just a bit older than my girls, and she said that B lost her first tooth right around her 5th birthday.  What?!?  I’m sure she’s lying.  I still haven’t checked KD’s tooth.  I figure if the tooth is loose, there’s nothing I can do about it anyway.
But I am not a slacker Wom-Mom.  I know when those teeth actually do fall out, there won’t be loads of notice (a few days?  less than that?)  I need to have tooth fairies in the wings (haha), ready to hold teeth for exchanging into money.  [Shaun tried to say kids still get quarters for teeth and I reminded him that was 30 years ago and they probably get like $20 per tooth now.  He nearly had a stroke so I think we’ve compromised at $1 per tooth.  Maybe we’ll fork out 5 clams for a molar or something.]

I’ve seen a ton of cute tooth pillows on Pinterest, and we’ve even done a tooth pillow here on the blog, but I modeled the girls’ fairies after the fairies Thrifty Nana made Whit and me when we were little girls.  Ours still exist, but I can’t find them since we moved, so I’ll post a picture when they are unboxed – someday.  I have a good memory, fortunately.

Materials: you need about a fat quarter yard of the fabric of your choice.  This will be the fairy body/dress and arm.  A scrap of fabric for the money pocket. You need about a yard of ribbon; 6 inches of lace; and miscellaneous items: pieces of felt in white, “skin color” (don’t get me started on how hard it is to find this), blue & pink; black & pink puffy paint; “hair color” yarn (your choice of color); little flower for accent in hair; craft glue; matching thread; loose craft batting; and beads.
Pattern:  I made my own up from the memory of my fairy from childhood.  It’s not a skinny fairy, more like a stuffed pillow fairy.  I decided I wanted my fairies to be slightly bigger than my childhood one, because I had to make the pocket big enough to hold more than a quarter (right, Shaun?)  The size of the ‘U’ shaped pink fabric I cut out is roughly 4"x10".  Just guess.  I didn’t use a pattern.  For the fairy arm, it measures about 1"x3".  I cut out little feet and a hand from the tan felt, leaving the ‘wrist’ and ‘ankles’ a little extra long so they would have enough to sew into the seam with the dress and sleeve. 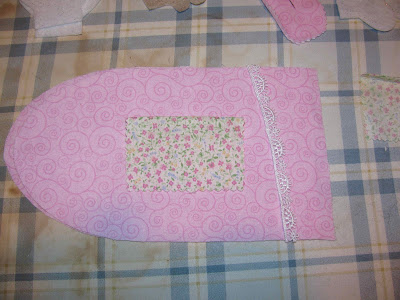 I cut out wings in a shape kind of like butterfly wings with one more lopsided than the other, and left an extra bit of length to sew into the seam of the dress.
I took the approximately 1 yard (it was a little less, but close) of ribbon and cut it in half.
NOTE: Some pieces I used my pinking shears (the arm and pocket) because those are tiny and I didn’t want to have to bother with turning over the teeny little edges and turning the sleeve right side out.  Since the fairies aren’t going to be extreme play items, I thought the 'pinked' edging would be just fine and likely won’t fray much, if at all.  Plus, it provides cute contrast.
I cut out the money pocket to be 2"x3".  3 sides are with pinking shear, the top is turned down and sewn to be a smooth pocket edge.
I cut the lace to be the width of the dress.
Before any other sewing can occur, you must sew the money pocket and lace onto the dress (the good side of one of the dress pieces).  This is now the front of the dress.  Lay the front piece on a flat surface and gently lay down one wing toward the ‘U’ curvature end of the dress, center one piece of ribbon, lay the other wing on top of it to match up, and pin in place.  The wings and length of ribbon will face INSIDE because once sewn, you turn the right sides out and they will pop out.  Now lay the other ribbon, long side facing in again, about the right end of the money pocket.  Pin in place.  Center the feet in place at the end of the fairy dress – feet facing inside again. 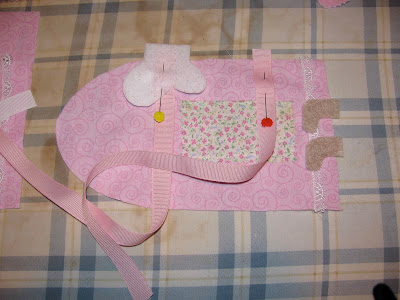 Gently lay the other dress piece, right side of the fabric facing in, with all of the edges matching up with the front piece of the dress.  Pin together.  I sewed all the way around, leaving an opening at the bottom of about 2” for turning right side out, and being careful not to sew over my pins which could break my needle. 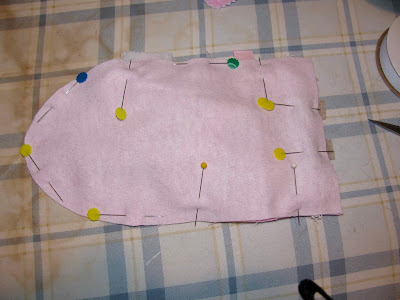 Now turn it all right sides out.  Check to make sure all the feet and wings and ribbons got sewn in completely.  Re-sew anything in a little further if it didn’t get ‘caught’ the first time around.  Seam-ripping is a part of crafting, Friends, though luckily I only had to use my trusty rip-ster once this project (miracle!)

Make sure all of the edges are nicely turned out and then start stuffing.  I made the fairy nice and fluffy.  I thought of it as the fairy flying and her dress was billowing in the wind; or that, duh, she’s a tooth pillow, so she needed to be puffy.  (Thrifty Nana thought she was “fat”.  Actual quote.)  When the fairy is stuffed to your liking, sew the opening shut by hand. 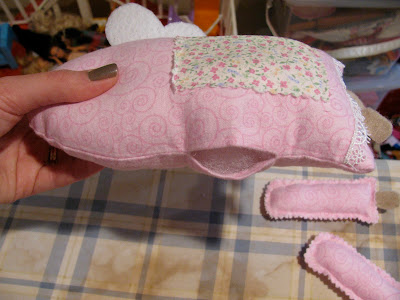 You can sew the arm together without turning the fabric if you cut it with a pinking shears like I did.  Just sew it, leaving the ‘cuff’ of the sleeve open, stuff it up, and then insert the hand and sew the ‘cuff’ shut. 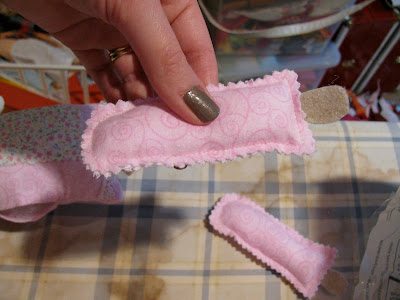 The hardest part was the face.  I actually had to take a break from face-making to go to McDonald’s to get a large Diet Coke and a Large Unsweetened Iced Tea with No Ice.  It was serious.  I am not an artist, Friends.  Crafter: yes.  Artistic eye: yes.  Artistic ability: slim to none.  Ability to create faces: kindergarten.  You can just look and see what I did.
The hair I made loops around my fingers with yarn and then tied it in the center, perpendicular, like a bow.  This I glued on.
I sewed the arm and head on.  Since I have twins, I wanted the fairies to have personalization, so I made little necklaces with pink buttons and ‘k’ and ‘e’ beads.  Super cute. 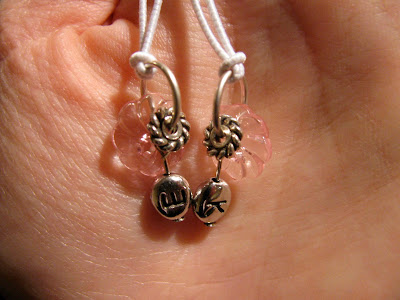 The girls think these are adorable.  They look a lot like the ones Thirfty Nana made for us when we were kids – except they’re bigger.  TN says that their heads are too small for their bodies.  I think she doesn’t like them very much cuz she's biased to her original version.  Well, TN, it's not 1983 anymore, kids get more than a quarter for teeth evidently.  And that’s mean, especially since she knows how hard making those faces was for me.  She just doesn’t even know anything.  I think they’re sweet.  Maybe they’ll end up bringing the girls $20 per tooth just to show TN how cool they really are.  I wonder what Shaun will say when I explain to him that the girls need megabucks from the tooth fairy because my mom said their fairy heads are too small?
Posted by WOM-MOMS at 9:16 PM