Amazingly (tear) my lil' ones turn FIVE tomorrow.  I am in shock.  That's right.  Five years ago Shaun drove me to the hospital for my scheduled c-section - easiest birth ever.  I'll just say that c-sections should be given to everyone.  Like balloons.  Just hand that sh*t out.  Lori claims that natural delivery *with epidural* was totally cool, but she also had a mini baby.


KD and Easy Mac were, by far, the most perfect babies ever born.  I'm their mother, don't even debate me on this all you other moms out there!  All our babies were the most perfect, I get it blah blah, but on the commemoration of my own babies' births, I get to make the claim, got it?

Jumping ahead and out of my reverie, this year, the girls asked for a VAMPIRE BIRTHDAY PARTY!!  This in*no*way has to do with their mother's love of Twilight.  Nope.  And I can say in all sincerity that they asked for a vampire theme on their own.  Liking vampires, however, could be genetic on both the female Hedren and Denham sides of the family.  Shaun is resigned to his fate.  He grumbled under his breath, for just a nanosecond, and maybe died a little inside, and then decreed that IT COULD NOT be a Twilight party and that the adults could have Bloody Marys.  Great idea, I said.  I also, under my breath, said that it wouldn't be ONLY a Twilight party, it would be a vampire party, which includes Twilight.  See what a good wife and mother I am?  I accommodate everyone, including myself.


Having their birthday in October makes this a great party theme since Halloween is just around the corner and all decor is already on sale at stores (because they're already making room on shelves for Christmas decor - it's effing ridiculous).  I tried to convince my friend, Grizz, whose c-section is scheduled for a mere TWO days after Halloween that they should move the delivery of Baby H up to Oct. 31, but she and her husband looked at me like I had two heads and proposed that they burn their house down.  Whatevs.  I think that a Halloween birthday would be the BEST THING EVER.  I wanted to get married on Halloween and have a costume wedding, but I think that a combination of Shaun politely disfavoring the idea and not wanting to wait for October to come around pushed us to July.  That would've ROCKED.  Maybe we can just change our anniversary and wear costumes.

I was trying to be economical, but finding ideas online for a KID vampire birthday party wasn't easy, even on my beloved Pinterest.  I found adult party stuff, which had a lot to do with alcohol; I found Twilight party stuff, which was outlawed; and I found kid Halloween stuff, which wasn't quite what I was after.  So I pretty much had to hodge-podge things together.  I decided to expand the theme slightly to include bats and coffins, since that would still play on vampire lore, but allow a lot more decor options (given all the Halloween decor out there).  I kept the colors black and red, with touches of purple.  I also added in some spiderwebs and spiders, which Shaun said didn't go with the theme but I reminded him that Dracula doesn't dust his castle so it has lots of spiders and spiderwebs.  He can't argue with such solid logic.


These are some of the things I did: blood-dripping candles, which are a simple dripping of red candle wax around the edges of a larger white candle.  Works like a charm. 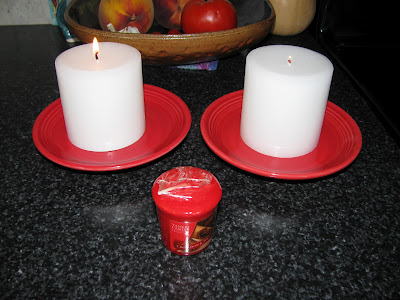 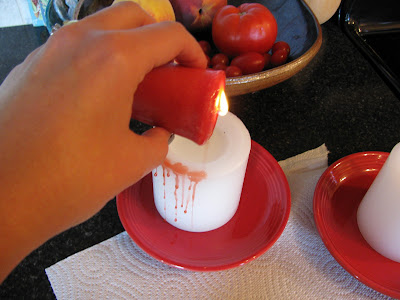 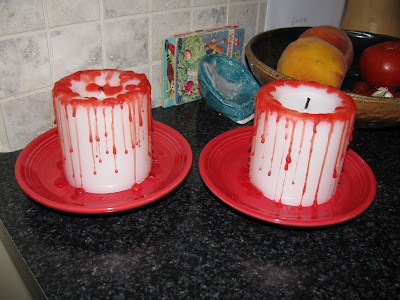 I talked to a lady at JoAnn and she suggested making bloody jello, so I made cherry jello in wine glasses (one small box made 3 large wine glasses half full) that I put pre-washed spiders and fingers in.  Totally creeptastic.  The kids LOVED it.  Actually, Easy Mac and KD loved picking the stuff out of the jello but weren't as keen on eating the jello.  Poor sports.  That's ok.  Auntie Heather and I ate it instead and it was DALISH. 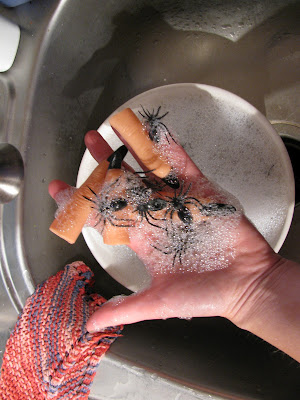 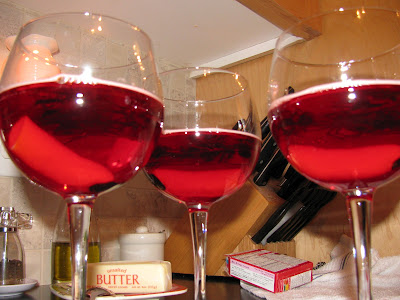 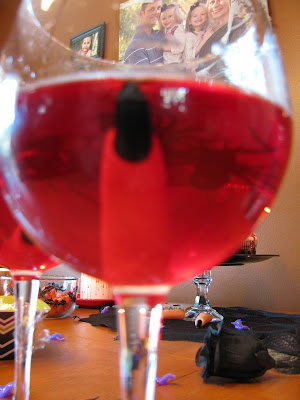 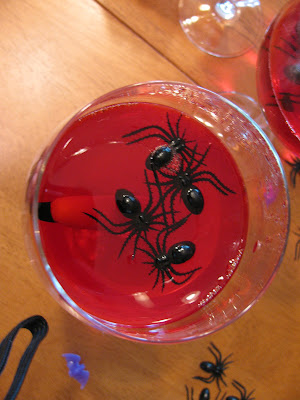 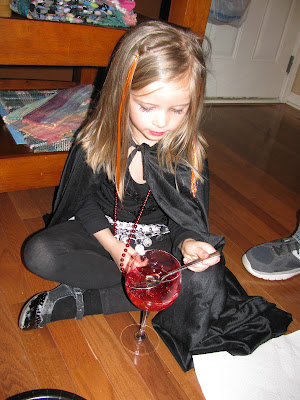 Pretty much my fave part was the pictures on the wall.  I bought gothic-looking black picture frames (with glass) at the dollar store.  They were mostly 4"x6" size.  Into them, I put close-up pictures of Shaun, the girls, their friend AF, me and my fave vamps Edward and Eric from TrueBlood - so this is how I got my Twilight in.  I really didn't go overboard, honest.  Then onto the glass, Shaun and I painted fangs and bite marks and red blood droplets on our faces over the glass in white and red fingernail polish.  It was genius.  I hung these up with 3M removable hooks in the dining room around our larger family pic there, and then to make that more theme-y (since I wasn't about to paint on that with nail polish) I put some fake spiderweb and spiders.  It looks so cool. 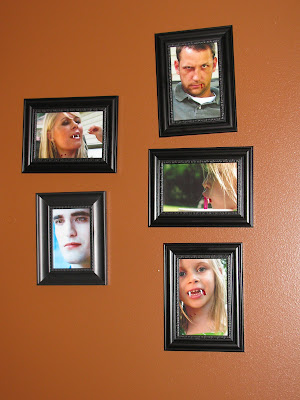 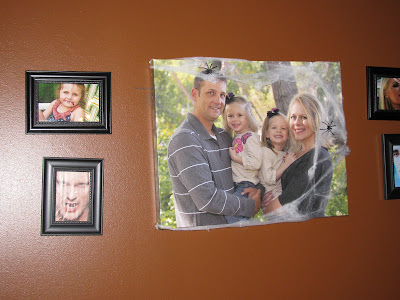 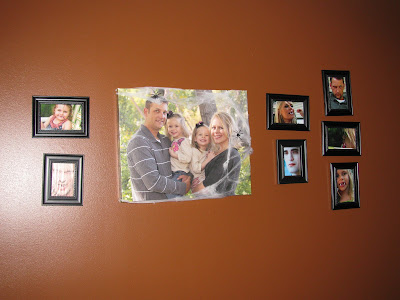 I made a bat banner out of foam bats I bought in a pack at JoAnn for $2.  I tied the wings together with string so they acted like joints and were flexible.  I also bought a big purple garland bat from Target for $1 and gel sticky blood drops for the glass for $2.  To give any party room more oomph, add some crepe paper streamers, and for this, I did black of course! 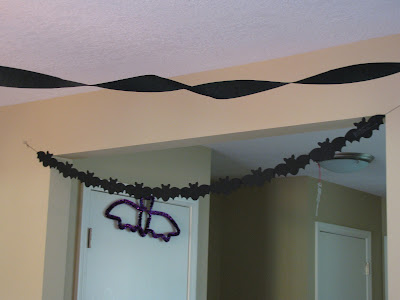 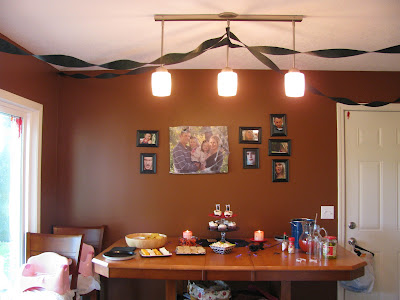 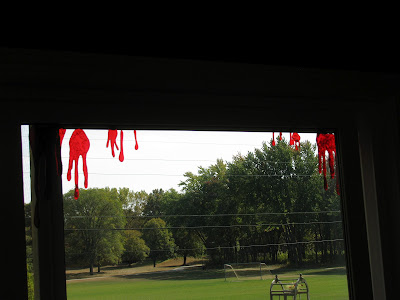 We kept the food pretty simple.  I made red velvet cupcakes, which was really economical since you can now buy red velvet cake mix for $2.99 which comes with frosting and a piping bag for putting the frosting on the cupcakes.  Awesome.  I couldn't help myself, though, when I saw at JoAnn that they make a coffin cupcake-size cake pan.  I knew the girls' cakes had to be made out of those.  Decision Done.  I did feel like I was cheating though, just doing cupcakes, so I decided to make a cupcake stand.  I bought dollar store crystal candle pillars and black and red melamine plates from Target.  Total cost - $5.  Glue gunned together, it looked so cool.  And then we made spaghetti, homemade garlic bread, some dips and red caramel corn (which kinda looked like brains if I'm being honest). 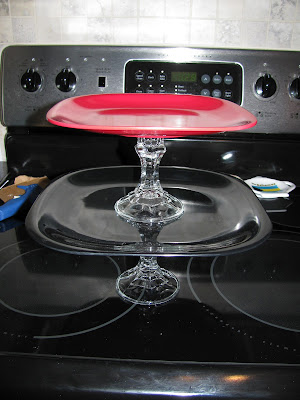 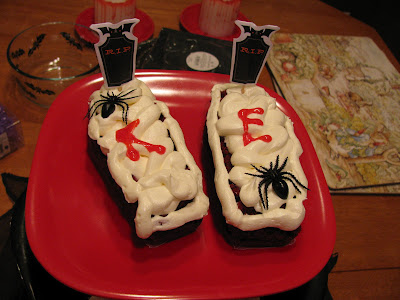 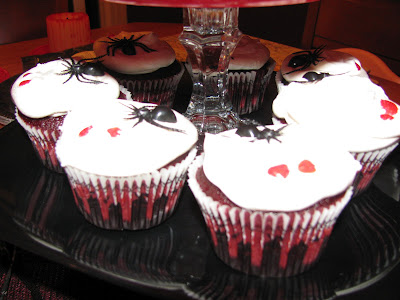 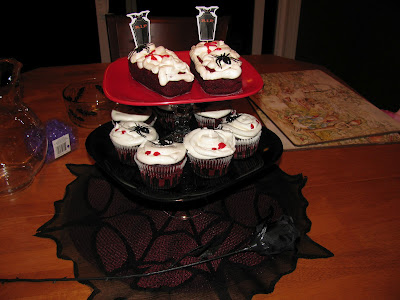 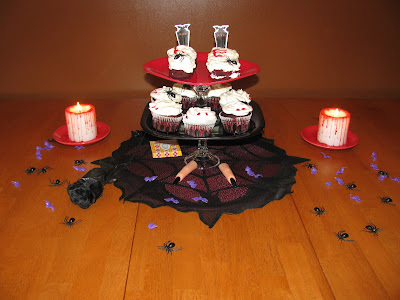 I had to make the girls look like little vampiresses.  I found them black dresses with black sequins (they love wearing dresses, so I opted for a black dress from Children's Place that they can wear many more times rather than a costume-type outfit) and black leggings and black socks.  At Whit's Ulta store we found fancy, Gothic feather headbands.  And, OF COURSE, I did their make-up FULL ON GOTHIC.  It was pretty much the cutest ever.  Kohl around the eyes and red lips.  They thought they were just so gorgeous and grown-up.  Per KD's request, I found glow-in-the-dark vampire teeth, and I also found kid-size vamp capes for all 3 girls at Walmart for $5, which was less than I could've made them for.

So that's the 5th Vampire Birthday Party.  It was awesome.  On the girls' party favor bags, I put this quote:

Forget princess, I want to be a Vampire. 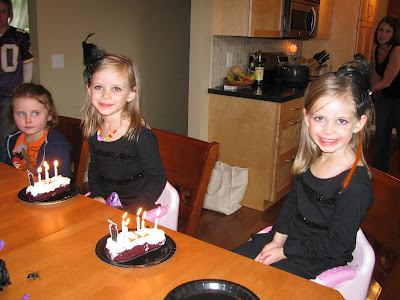 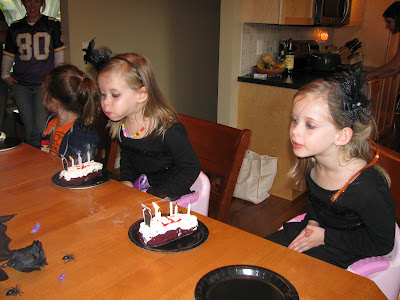